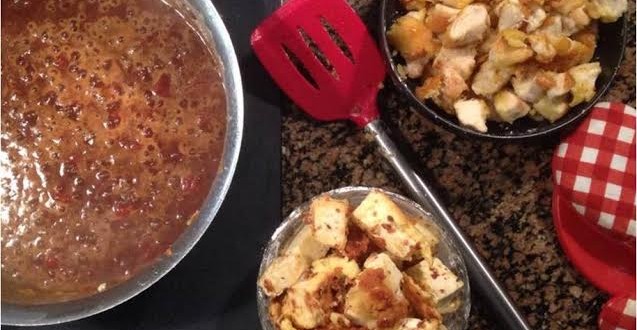 I don’t insist that my dogs keep Kosher but I have a new puppy who loves meat broth on his dry food, so I had to figure out how to make it in a kosher kitchen. I couldn’t just buy soup bones because I didn’t want to cook non-Kosher meat in my kitchen. I asked Trader Joe’s if they could order in kosher soup bones. “No” was the answer but then I noticed that they have kosher T-bone steaks. So I used the meat in a stir fry for humans and cook up the bones in water for a nice broth to pour over the dog food. I froze several gallons. Keeping kosher in Spokane isn’t impossible but it does sometimes take some creativity.

If you are planning to open a Kosher Asian Bistro in Spokane or invited people who keep kosher over to your house for dinner there are several considerations.  Step one is making sure there are no ingredients that are overtly non-kosher.

Step two is learning how to serve meat and dairy products. The Bible prohibits “seething a kid in its mother’s milk” (Exodus 23:19; 34:26; Deuteronomy 14:21).  Through the ages and in modern times this has been interpreted as a law against cooking meat and dairy together and is the reason a cheese burger or creamy beef stroganoff will not be on the menu in a kosher home or restaurant.

In Israel and in large cities, Kosher restaurants often only have dishes made with meat or dishes made with dairy. You can hear a group of people planning to go out together saying, “Should we go for meat or to a dairy restaurant.” Very few Kosher restaurants have both meat and dairy on the menu. The third option is to have a vegan restaurant where neither meat nor dairy is served. There are also a number of items which are considered “Parve.” These parve ingredients can be served alone or alongside meat or dairy. More about Parve in Step Three.

One way to accomplish this meat and dairy step in a Kosher Asian Bistro is simply not to serve anything with dairy products. The meat and dairy prohibitions are not such a big issue for Asian restaurants because dairy is not a big menu item. For this step in the process of making your bistro Kosher go through your menu or list of ingredients for  meat that could be kosher (commonly beef, lamb, chicken, or turkey) and which ingredients are dairy (milk, cheese, yogurt, cream or ice cream). Consider what alternatives are available for dairy ingredients in meat dishes. Make sure you let people know if you serve coffee with milk at the end of the meal or are planning ice cream for dessert. This would not work for some kosher Jews. Alternatives are coconut milk in a meat meal or non-dairy creamer for tea or coffee. With so many people who have dairy allergies there are starting to be lots of cow’s milk alternatives that are vegan, like coconut ice cream, almond milk, or soy cheese. Coconut, almonds, rice, and soy are all Parve and can be served with either meat or dairy menu items.

Some people who keep kosher will eat dairy items on a separate plate then let a period of time pass before eating a meat item on a new plate. How much time is allotted between eating dairy and meat depends on the person’s level of kashrut or keeping kosher. Some people allow only a few minutes while others require several hours between eating meat and dairy.

For a restaurant that is working towards becoming kosher it is a start to have all meat and dairy separated into different menu items. Customers can choose for themselves how much time they will leave between meat and dairy or whether they will even order it in the same meal.

At home, some of the things I hear from the children are: “Wait, is this dairy?” “Which sink should I clear the dishes into?” “Even though there is fake cheese in the mac and cheese, it is still considered dairy, right?”

“Are eggs dairy?” No, they are Parve, so can be cooked in a meat pan or a dairy pan. The default for Parve meals is to use the dairy dishes.

In a Kosher home there are plates, utensils, and cooking ware that are completely separate for meat and dairy. In our kitchen the left side of the kitchen cabinets and drawers are for meat and the right side is for dairy. Things in the refrigerator are not separated although some people have two refrigerators, two sinks, and two ovens in their kitchen.

In 2013, when I bicycled across the country with Hazon, raising money and awareness for sustainable agriculture and food justice, we kept entirely kosher. Meat meals where completely separated from dairy meals. Both the meat and the dairy were kosher, which means they were prepared, slaughtered, packaged, and cooked in a particular way. Grow and Behold sponsored the ride so all of our meat was kosher and natural … and delicious. All of the dishes and utensils were kept separated. We had separate dish towels for drying the meat dishes and the dairy dishes. Along the way we camped, stayed in community centers, schools, churches, and synagogues. I learned that an oven can be made to be kosher or kashered by running it through the self-cleaning cycle. An oven that doesn’t have a self-cleaning mode can’t be made kosher. So we used the oven in some places and didn’t use it in others.

Often dishes and utensils are color coded for the ease of keeping them separate. Typically red is for meat and blue is for dairy. Our kitchen in Spokane has red handled knives and fork, as well as red cutting boards, red cleaning sponges, red spatulas, etc. There are blue edged plates, blue handled pans, blue serving bowls, etc.

Glass is the material that can go back and forth, if needs be. Glass plates can be used to serve meat and then, at another time, after they are washed they can be used to serve dairy. There are also other ways to change things from being meat dishes to dairy dishes. We can pour boiling water over them or bury them in the sand or pack them away for a year.

Some Jews will eat kosher meat that has been cooked in a non-kosher kitchen. On the other hand, some kosher households have three complete sets of kitchenware, one for meat ingredients, one for dairy ingredients, and one for Passover.

2 pounds skinless, boneless chicken breast halves – cut into bite-size pieces. Kosher chicken is available in Spokane, Washington at Trader Joe’s. Kosher chicken means the chickens have been slaughtered and packaged under the guidance of a rabbi in a particular way.  Small squares of super firm tofu can be used in place of the chicken.

2 eggs. As mentioned egg are not considered dairy. They are “Parve”

1 teaspoon salt (Kosher meat is salted in the process of packaging as part of the “kashering” process, so you may want to add less salt.)

Coat the chicken pieces with 1/4 cup of cornstarch; set aside. Beat the eggs, salt, and pepper in a mixing bowl until smooth. Stir in the flour and baking powder until no large lumps remain. Mix in the chicken until evenly coated. Heat the vegetable oil in a wok or large skillet over high heat. Drop in the individual chicken pieces or tofu squares. Cook until golden brown and no longer pink on the inside, about 12 minutes. Set the chicken aside. Keep warm.

Reduce the heat to medium-high and stir in the sesame oil, ginger, and green onion. Cook and stir until the onion is limp and the ginger begins to brown, about 1 minute. Pour in the water, vinegar, and sugar; bring to a boil. Dissolve the cornstarch in the soy sauce and add to the simmering vinegar along with the vegan “oyster” sauce and ketchup. Stir until the sauce has thickened and is no longer cloudy. Stir in the chicken and simmer until hot.

Serve over rice, noodles, or in lettuce wraps.