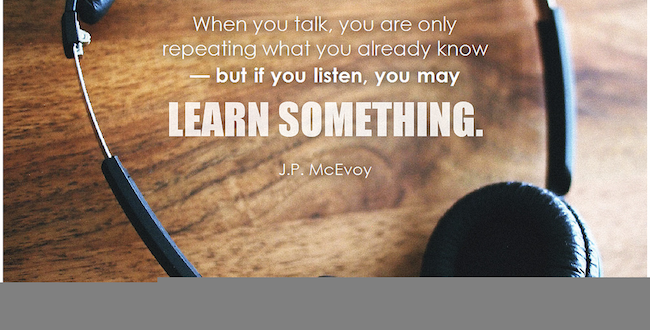 Symphony of Love photo by Daria

Key to Survival: Listen, Talk to Each Other

Share this story!
By Emily Geddes
Friends, how are we going to survive the next four years, let alone the next lifetime, if we can’t talk to each other?
There’s a whole a lot of monologuing and not a lot of dialoguing happening. Instead of trying to find common ground, we bust out of the gate with guns blazing – name-calling, belittling, impugning the motives and intelligence of anyone with a different view. We all want to put our opinions out into the world, which is totally our right, of course, and we need to speak up for what we believe, but too often that is the end of it and we don’t seem to be interested in understanding each other or moving the conversation forward. Instead of productive dialogue, Facebook threads and website comments sections too often devolve into a stinking morass of insults and shouting. (Plug for Spokane Faith & Values as one of the few places that’s less likely to happen).
I’m not looking for a feel-good “kumbaya moment.” Holding hands and pretending everything’s OK, dismissing others’ concerns or fears, isn’t real unity and isn’t going to solve the many problems we face, and refusing to acknowledge facts as facts is not a foundation on which anything lasting can be built. But listening to each other with humility is a start, realizing that our personal experiences, as valid as they are, aren’t the beginning and end of life on this earth, and what we see as obvious common sense simply may not answer another human being’s needs.
Those of us with privilege have a greater responsibility to listen. I know the word “privilege” tends to get defensive hackles up, but having privilege doesn’t mean life has been easy. It doesn’t mean a person hasn’t worked hard to get where s/he is, and it doesn’t mean anyone’s opinions aren’t valid. It does mean, however, that we need to listen, that we have blind spots of which we are blissfully unaware.
If you are white or male or Christian or straight or middle-class or able-bodied or mentally healthy or conventionally attractive or college-educated or own a home or are married or a number of other descriptors, you have at least some privilege, whether you have recognized it or not. I sure do. And the duty lies with us to seek out the voices of those with different experiences and listen carefully. It takes humility and a conscious choice to swallow pride and hear hard truths that contradict our worldview, but we are our brothers’ and sisters’ keepers, aren’t we?
Please recognize that this isn’t directed at any one part of the political spectrum. Confirmation bias is a human condition, not a partisan one. Echo chambers are comfortable and we all live in bubbles.
So what do we do?
Well, this is what I’m going to focus on, some of which I’m already trying to do and some I definitely need to work on. I’d love to hear your ideas, too.
Ok. Your turn.

Previous What can we do to help immigrants?
Next City-wide Rally for Refugees to take place in Spokane Sunday