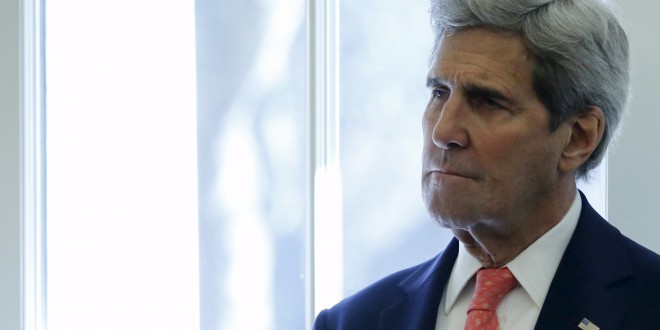 DAVOS (Reuters) – U.S. Secretary of State John Kerry said on Thursday he believed Islamic State’s military capabilities in Iraq and Syria would be seriously weakened by the end of 2016.

Asked at a media roundtable on the sidelines of the World Economic Forum in Davos, Switzerland, whether this year would see the end of Islamic State, Kerry replied, referring to the militant group by an Arabic acronym:

“I think that by the end of 2016, our goal of very seriously denting Daesh …will be achieved. I think we are on track.”Kerry said Islamic State has already lost 20-30 percent of its territory in Iraq and Syria combined and about 40 percent in Iraq.

The jihadist group lost control of the western Iraqi city of Ramadi last month, in a sorely needed victory for U.S.-backed Iraqi forces.

But critics, including some in the U.S. Congress, say the U.S. strategy is still far too weak and lacks sufficient military support from Sunni Arab allies, while Islamic State has also established a foothold in other countries in the region, notably Libya and Yemen.

Kerry said the coalition had upped its engagement significantly, noting that defense chiefs from the United States, France, Britain and four other countries had pledged to intensify the fight.

Kerry said he planned to meet on Feb. 2 with foreign ministers from 24 of the nations that were the most active in the anti-Islamic State coalition to get additional commitments.

Previous Meet the newest FāVS’ journalism intern
Next Ask A Mormon: What do Mormons believe happens to us after we die?