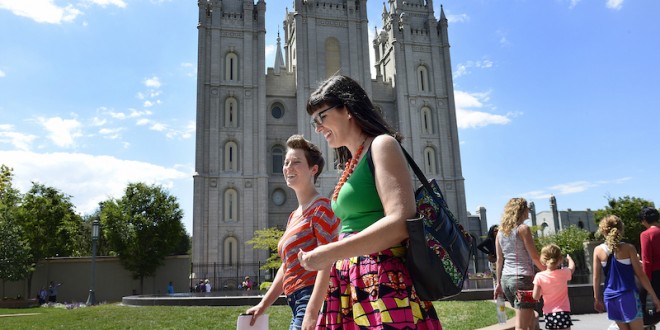 Scott Sommerdorf | The Salt Lake Tribune Kate Kelly, foreground, who later spoke on " Finding Joy in Authenticity" marches past the Salt Lake LDS temple along with others on their way to deliver resignation letters to the Church office building. Prominent dissident Mormons held a rally and mass resignation from the LDS Church, Saturday, July 25, 2015.

SALT LAKE CITY – When Stephanie Engle was a teenager, she struggled with what she termed as the racism and sexism within the LDS Church.

Engle said she researched Mormon history after moving away from home for college, learning about polygamy and other “really questionable practices” of church founder Joseph Smith.

“I just thought this is so obviously not true,” she said. “I can’t keep claiming that I believe it.”

On Saturday (July 25), six years after ending her participation in The Church of Jesus Christ of Latter-day Saints, Engle took a final step to sever her ties with the Salt Lake City-based faith.

With a signed letter in hand, Engle joined roughly 100 current and former Mormons — including Ordain Women co-founder Kate Kelly — at a mass-resignation event a block from the church’s downtown headquarters.

“Before we think about having children, I would like to have it done,” she said of her resignation.

Organizer Brooke Swallow said the event  was intended to provide a sense of community for people leaving Mormonism.

She said the resignations are not done out of anger nor to provoke the church, but to show a sense of dissatisfaction among church dissidents.

“We know that it’s a painful process,” she said. “Some people are ostracized or they feel like they need to ostracize themselves from their Mormon families.”

Former LDS bishop Earl Erskine, host of the online video series “Ex Mormon Files,” said his withdrawal from the church began after he read an 1830 edition of the faith’s signature scripture, the Book of Mormon, and noticed discrepancies with more recent printings.

That inconsistency became a sticking point, he said, and opened him up to questions about other areas of church history — from the foundation of the religion to purported translations of Abrahamic texts.

Kelly, who was excommunicated from the church last year after advocating for the inclusion of women in the all-male LDS priesthood, told the crowd: “If you stay, you should raise hell,” she said. “I think you have a moral imperative to make it a better place for children and especially for girls.”

In a statement, church spokesman Dale Jones said:  that regardless of their choice, “we love them and wish them well, and hope they will find the support and answers they seek.”

Previous Planned Parenthood and Finding the Truth in the Midst of Confusion
Next POEM: To Dust You Shall Return