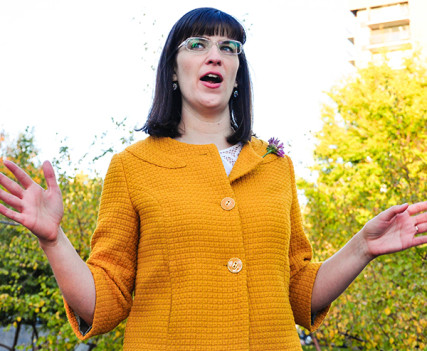 SALT LAKE CITY (RNS) Kate Kelly, who has led the effort to ordain women to the Mormon priesthood, has appealed her excommunication from The Church of Jesus Christ of Latter-day Saints.

The appeal includes a letter of support from Kelly’s husband, Neil Ransom. He contends the way leaders excommunicated his wife without disciplining him is proof of sexism in the church.

Kelly sent her appeal dated July 23 to Scott Wheatley, the president of her former stake in Virginia. It’s posted to the Ordain Women website.

“I have done nothing wrong,” Kelly writes. “I ask you, President Wheatley, to do the right thing and reinstate me to full membership in the Church.”

In her argument, Kelly contends her lay leaders never asked her about women holding the priesthood — a point the leaders disputed in the letter excommunicating her.

According to the appeal, Wheatley conducted only a “pro forma” counseling session during two meetings with Kelly. Wheatley failed to ask her important questions, it said, including whether she has a testimony of Jesus Christ and if she feels excluded from leadership opportunities.

She contends the disciplinary hearing held in absentia in Virginia was unfair, and that attending by video was not an option. Kelly said she did not trust the link would be secure and that church leaders would not edit a recording.

Kelly moved to Utah from Virginia in May. On June 23, LDS lay leaders in Virginia excommunicated her for “conduct contrary to the laws and order of the church.”

Kelly can still attend church, but excommunication means she cannot hold church leadership positions, give tithes or offerings or wear temple garments.
In his letter supporting his wife, Ransom says he has been an integral part of Ordain Women — maintaining the website and speaking to reporters about the group. No action has been taken against him.

Previous Looking for the truth
Next BRIEF: 3-part series to focus on peacemaking through dialogue