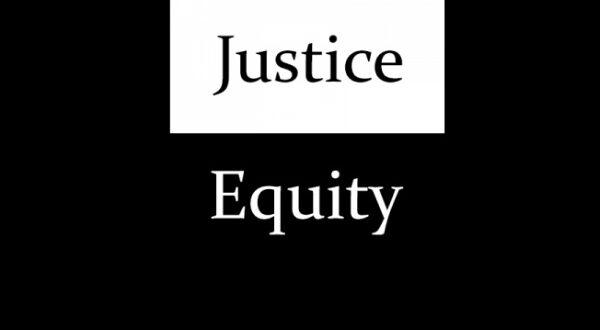 “It’s not fair!” wailed my 4-year-old grandson as his father carried him into the house. He had just thrown a rock at his sister as his father watched through the kitchen window. “I didn’t know you could see me!”

Even from age 4, we have perceptions of justice. What, exactly, is “fair?” What is “justice?” Definitions abound. Consider this one, the “principle of moral rightness.” Even this begs more questions than it answers. What is “moral?” What is “rightness?”

A recent FāVS column on justice called for a “higher standard,” one that will reflect the teachings of Christ such that they will become “visible in our own life by the way we show unity and love in a world of division and violence.” This principle of moral rightness is encapsulated in the Golden Rule, an ideal rarely realized, but stated variously in most religions. For example, Baha’u’llah wrote: “And if thine eyes be turned towards justice, choose thou for thy neighbor that which thou choosest for thyself.”

Elsewhere he wrote, “The best beloved of all things in My sight is Justice; turn not away therefrom if thou desirest Me, and neglect it not that I may confide in thee.” He goes on to suggest that justice provides inherent wisdom: “By its aid thou shalt see with thine own eyes and not through the eyes of others, and shalt know of thine own knowledge and not through the knowledge of thy neighbor…Verily justice is My gift to thee and the sign of My loving-kindness. Set it then before thine eyes.”

The word “equity” is often confused with “justice.” Equity “implies a justice that transcends the strict letter of the law and is in keeping with what is reasonable rather than what is merely legal.” This is an important distinction. Put another way, justice is the letter of the law; equity is its spirit.

Justice as practiced is complicated. The concept seems straightforward, but applying a law equitably often seems impossible, partly because of precedents. Is it just to prosecute a trespasser who can’t read the “No Trespassing” sign? What would be an equitable application of this law?

The Baha’i writings distinguish between justice and equity. Baha’u’llah writes: “Justice and equity are twin Guardians that watch over men…the cause of the well-being of the world and the protection of the nations.”

His son ‘Abdu’l-Baha drives the point home: “The Almighty hath not created in man the claws and teeth of ferocious animals, nay rather hath the human form been fashioned and set with the most comely attributes and adorned with the most perfect virtues. The honor of this creation and the worthiness of this garment therefore require man to have love and affinity for his own kind, nay rather, to act towards all living creatures with justice and equity.”

This advice plays out in our dealings with all living things, and the non-living elements that support them. Ecosystems provide sustenance, life itself. Is it equitable toward humanity at large for some of us to degrade and damage systems that support all of us? For example, some of us create pollution and greenhouse gases that affect our entire planet. These are not easy questions to resolve, but resolve them we must if we are to avoid further consequences of our reckless behavior — past, present, and future.

A standard of behavior based on justice and equity was described by Shoghi Effendi, grandson of ‘Abdu’l-Baha. He calls for a “rectitude of conduct, with its implications of justice, equity, truthfulness, honesty, fair-mindedness, reliability, and trustworthiness.”

High standards indeed! Yet essential if we are to overcome “division and violence.” Solving these problems must both transcend and employ economic and technological solutions. It will require morality — justice, and equity for all humanity, sisters and brothers sharing our planet.

It’s unlikely any of us can meet all the above standards, yet we can try – even knowing we won’t attain them. Staying aware of such standards is a good beginning. We can bring ourselves to daily account and ask, “How’d I do?” And we can respond truthfully.

“The most vital duty,” ‘Abdu’l-Baha has written, “is to purify your characters, to correct your manners, and improve your conduct…show forth such character and conduct…that the fragrance of…holiness may be shed upon the whole world, and may quicken the dead, inasmuch as the purpose of the Manifestation of God and the dawning of the limitless lights of the Invisible is to educate the souls of men, and refine the character of every living man.…”

This education begins with parents’ prayers before the birth of each child. It continues as a child learns to speak and pray, and to love the Creator. Such love generates a spiritual sense of equity and justice in us all.

Tags equity and justice and parenting

Previous Supporting Our Reporters: Meet Loren Negron
Next On Being a Journalist