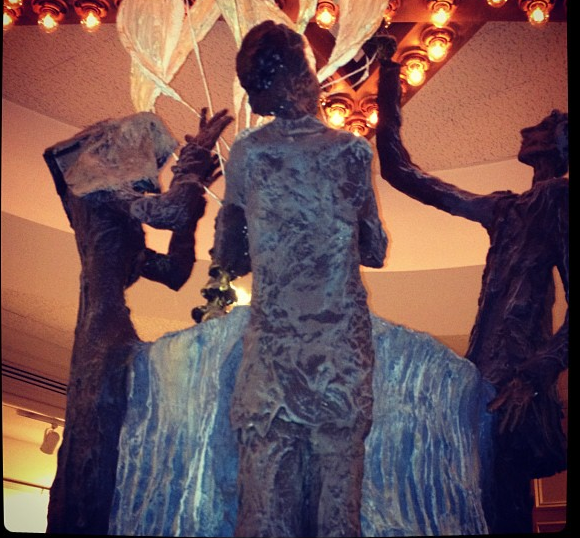 WASHINGTON — Reporting on the “enormously sensitive” subject of Israel requires an extra dose of journalistic basics if coverage is going to be fair and balanced, according to a panel of experts involved in U.S.-Israeli programs.

Speaking on Thursday to members of the Religion Newswriters Association at Washington’s renowned Adas Israel Synagogue, moderator Rabbi David Saperstein reminded reporters of such foundational journalism practices as “don’t make mistakes,” “make sure the Israeli position is always heard,” and “be careful of loaded language.”

Few issues are as delicate for reporters as Israeli politics and events, Saperstein said.

He cautioned against quoting two opposing opinions, one from each extreme, while ignoring the majority of people in the middle.

Melanie Nezer of the Hebrew Immigrant Aid Society said the current African migrant crisis in Israel is a good example of how reporting on Israel can be incomplete or superficial.

More than 60,000 Africans, mostly from Eritrea and Sudan, have crossed illegally into Israel, and their presence has drawn protests.

Those protests have made global news with some Israelis calling the Africans a “cancer” and other “ugly stuff,” Nezer said, but at the same time there are Israeli individuals and nonprofit groups that have provided food, shelter and other support to the migrants, Nezer said.

While the media are properly holding Israel accountable for the anti-migrant rhetoric, reporters should “look beyond just what the words are” and write about the actions of those who are helping the Africans, Nezer said.

Naomi Paiss of the New Israel Fund, reminded journalists that Israel is “an extraordinarily diverse identity and community.”

The range of beliefs among Jews about Israel is very, very wide, she said, and there are only two consensus points: Israel should exist and it should be secure.

Steve Krubiner of J Street, a Washington-based “pro-Israel, pro-peace” organization, urged reporters to consider the source when interviewing people about Israel. Even elected Israeli officials don’t necessarily speak for the majority of the population, he said.

He also illustrated the potential pitfalls of loaded language by citing a news article that was translated from Hebrew into Arabic. The original report contained the term “Israeli Defense Forces,” while the Arabic translation called it  “Zionist occupation forces.”

Saperstein and the other panelists said one of the most contentious topics in reporting on Israel today is the Palestinian-led “BDS” movement – for Boycott, Divest, Sanctions.

Paiss said BDS can be a legitimate too for change, as when it helped end Apartheid in South Africa. But she believes it is inaccurate when the media draws a parallel between Israel’s treatment of Palestinians and the racial discrimination that had existed in South Africa.

Krubiner said “the platform of the international BDS movement does not recognize the existence of the state of Israel,” and that J Street believes it “assigns blame unfairly to one side.”

He called for more public debate on issues raised by the BDS movement.

During a question-and-answer session, Krubiner said he does not welcome support for Israel from U.S. Christian groups such as evangelist John Hagee’s Citizens United For Israel, saying, “ultimately it doesn’t end well for Jews.”