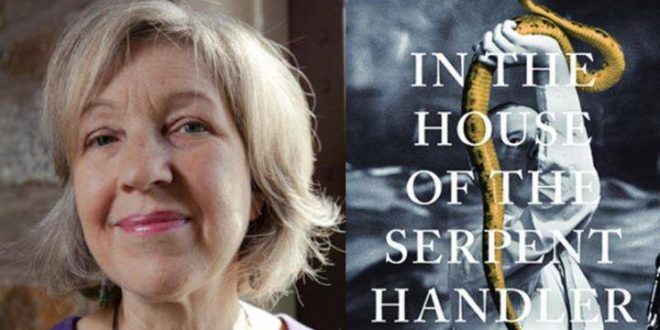 Journalist Julia C. Duin will be speaking at Gonzaga University’s John J. Hemmingson Center Saturday at 2 p.m., where she will be discussing Pentecostal snake handlers and other subjects covered in her most recent book “In the House of the Serpent Handler: A Story of Faith and Fleeting Fame in the Age of Social Media.”

As explained in her book, snake handling involves people holding venomous snakes in the air as a test of their faith while dancing, shouting and/or preaching.  The Gospel of Mark mentions this activity where it says that people shall handle poisonous snakes, as well as speak in tongues, heal people and drink deadly poison.

“A lot of people don’t even know what this [snake handling] culture is all about,” she said. “So, I have to introduce it to people, I mean I have to explain it, and kind of what are the verses behind it, the whole theology of it.  A lot of people they don’t even know what Pentecostals and Charismatics are, much less what this subset is all about.”

According to Duin, Pentecostalism is a Christian movement that stresses the gifts of the Holy Spirit where people believe in prophecy, discerning evil spirits, that God can heal and other supernatural aspects.  She added that Charismatics are similar except they stay in their own tradition and church whereas Pentecostals have left their home church and joined their own denomination.

Duin said that she will explain the religious basis of the culture as well as how Appalachia is constructed in regard to the snake handling culture.  She wants people to understand the theology behind it all, why these people believe the way they do and “why they feel that they need to die for it.”

Regarding those involved in this culture, Duin said she wants attendees to understand that they are not monsters, but are regular people.

“I just want to explain to people that these are really normal people,” she said. “A lot of people just think that these snake handlers are just freaky, that they’re just like totally…mentally ill or something, and no, they’re just really regular people and I really liked them.”

Though she may not agree with their theology, Duin said the people she spoke with are articulate, she got to understand their lives and grew to like them.  She said she wants to show people that these are not folks to be scared of and that they are ordinary people.

Through the event, Duin said she wants attendees to think about what they believe in and why and examine it because, with snake handlers, if there is an argument on the verse of the Bible the culture is based on, the snake handlers will challenge people and ask them why people leave out the verse on snakes despite it being in the same group of sentences as pray for the sick in the Gospel of Mark.

She added that she wants attendees to understand how people can crack under strain, particularly in the case of Andrew Hamblin, a preacher who, in her book, had turned a closed-down church into a snake-handling congregation in LaFollette, Tennessee.

“He had police going after him, he had 5,000 friends on Facebook, people were constantly trying to take down his account on Facebook…he was constantly attacked,” Duin said. “They had one thing after another going on; he had stuff in his marriage, stuff in his church, he had like five kids, I mean I couldn’t believe he was functioning after a while.”

When a friend of Hamblin’s died from a snake bite, Duin said Hamblin cracked and it turned out that his marriage was under strain that did not do well even during the best of times.

After Hamblin lost his church, she said that, at the end of the book, it went downhill from there, which eventually ended with him being put in jail for six months for aggravated assault after shooting at the home where his ex-wife Elizabeth Marie Hensley was staying.

Duin said that she is excited to meet the members of the Spokane community, and discuss and answer questions with them at the event.

The event will take place in room 314 A and is a fundraiser for SpokaneFāVS and a $10 donation will be requested at the door. Students can attend for free. Duin’s book will be available for purchase as well.

Learn more about this event on our Facebook page.

Previous Ask a Muslim: Why can’t Muslims eat pork?
Next Ask a Jew: Are Jews saved because they are God’s chosen people?