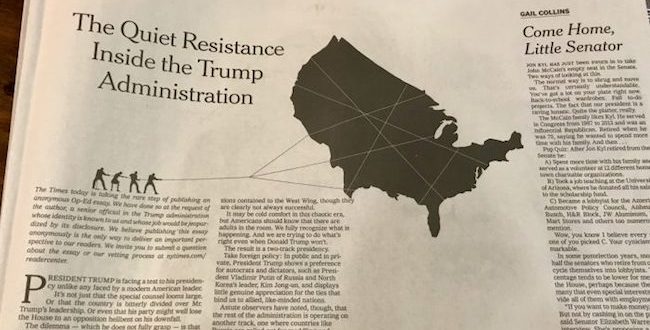 The New York Times ran an anonymous op-ed in September.

During my 45 years as a journalist I heard my share of criticism about my profession, and I’ve heard an awful lot of it since I retired.

But now even I am joining in the chorus. And once again it involves The New York Times, although this time it has to do with something far more egregious than the Times’ “Sex in a Canoe” article that I wrote about a few weeks ago.

I’m referring to The Times’ decision to run an anonymous article by someone identified as “a senior government official” who describes efforts to tame President Trump’s wildest ideas. The problems caused by that decision already are being chronicled, as in a recent story from the Associated Press.

But there is a great deal more at stake, especially for journalism as a profession. For me this is a question of violating the ethics of journalism.

By giving one individual such an extraordinary platform to criticize – anonymously – the actions of President Trump, The New York Times has violated perhaps the most basic rule of journalism. Rather than simply report on what government is doing, that article may undermine President Trump’s trust in his advisers. Whenever he hears a naysayer he will be tempted to think, “Maybe this is the guy (or woman) who wrote that article.”

He thus could be encouraged to ignore those who question his ideas, which, in turn, could materially affect the way he evaluates his options before making decisions. And by increasing the chances that Trump will only listen to himself and to his yes men and assorted sycophants the Times has potentially changed the way the White House functions.

Did The Times ever consider the possibility that it was “being played” by an ingenious Trump toady who wanted to separate the president from those naysayers? I can only wonder.

Make no mistake, I think Trump is a poor excuse for a president. But he is the president, and as president he must have access to all the information he needs in order to carry out his duties. At least in theory The Times has undermined the naysayers in his administration who might provide that information.

The Times’ decision is the kind of fundamental mistake that journalists have been told they must never make, the one line they must never cross – interfering directly in the conduct of government.

The Times should be ashamed of itself for undermining the notion of journalism as an unbiased, independent source of news. And all journalists should condemn The Times for making their jobs even more difficult because it has undermined the trust that Americans have in them to speak the truth fairly, objectively and independently.

That essay is NOT news. It is just one person’s assertion of what’s going on. If The Times had done its job, that essay would have been the starting point for some hard reporting. The Times’ reporters should have been ordered to confirm those assertions through their contacts within the administration.

The Times’ failure to do so sounds like intentional journalistic laziness to me, and implies that its goal is to hang Trump out to dry. Even as ardent a Trump detractor as I am believes Trump deserves better, and especially from the icon of American journalism.

Perhaps worst of all, The Times has given the author power to cover his or her tracks rather than to take responsibility for bringing his or her concerns to those who are responsible for oversight of the presidency. This is another example of direct interference in government operations that is borderline illegal, and morally and ethically reprehensible.

If the statements in this article are correct – and there is no way of knowing for sure – the author should have brought his or her concerns to those in Congress who can evaluate whether they constitute grounds for impeachment or, at the very least, a tongue-lashing from Trump’s fellow Republicans.

It is now all but impossible for anybody in the Republican Party to directly address these problems with the president because doing so could inspire Trump to lump those critics in with the author. This gives Trump all the ammunition he needs to ignore Republican pushback to his agenda – i.e., an engraved excuse for Trump to “go rogue.” And what good will that do?

The Times’ mistake will impact journalism and journalists for a long time. We must endure criticism from Trump and many others about “fake news,” which he believes is any “news” that doesn’t make him look good. And now Trump can use The Times as “proof” that “the media” are trying to lynch him.

Previous Temple Beth Shalom to offer beginning classes this month
Next Ask An Atheist: Why do you pose ‘annoyingly hard’ questions to Christians?