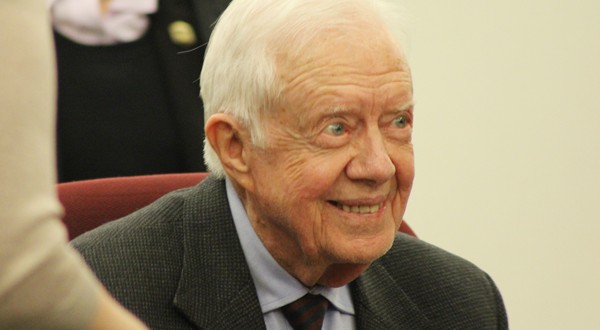 (RNS1-may7) Former President Jimmy Carter during a book signing at The Washington Post on March 26, 2014 for his new book, “A Call to Action: Women, Religion, Violence and Power.” For use with RNS-JIMMY-CARTER, transmitted on May 7, 2014, Religion News Service photo by Adelle M. Banks

Former President Jimmy Carter said in an interview that he thinks Jesus would approve of gay marriage.

“I think Jesus would encourage any love affair if it was honest and sincere and was not damaging to anyone else, and I don’t see that gay marriage damages anyone else,” Carter said in a HuffPost Live interview with Marc Lamont Hill published Tuesday.

“I believe Jesus would approve gay marriage,” he said. “That’s just my own personal opinion.”

Carter said that while he supports same-gender weddings, he doesn’t think churches who disagree with the practice should be required to perform them. “But those two partners should be able to go to the local court house or a different church and get married,” he said.

Carter, who identifies as a “born-again Christian” was on the Huffington Post program to discuss his new book “A Full Life: Reflections at Ninety.” Carter’s faith and spirituality are heavily talked about in the memoir.

Previous Graffiti unacceptable, let’s stand with Spokane’s Muslim community
Next Ask A Religious Scientist: What happens after you die?