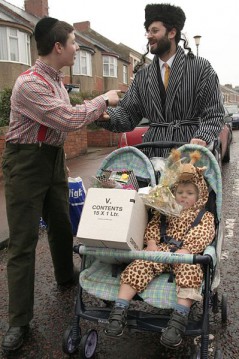 It’s almost Purim, and Rabbi Tzvi Hersh Weinreb is feeling a mix of joy and dread.

Joy because the Jewish holiday commemorates the survival of ancient Jews against the threat of extinction and children dress in costumes and exchange gifts and candy. Purim, on Wednesday, is also Weinreb’s birthday.
Dread because too many times, Weinreb has seen the high cost of Purim’s darker side, the “ugly and despicable behavior” of young yeshiva students who drink to excess on a day that is equal parts Halloween and Fat Tuesday.
A close friend was killed in a drunk-driving accident, and another car accident — in the parking lot of a famed Torah institution —nearly claimed the leg of a young boy.
In a recent commentary, Weinreb described “scenes of young Torah scholars rolling in puddles of their own vomit, totally incoherent, uttering obscenities that they would be ashamed to pronounce if they were sober.”
At the root of these tragedies lies the Purim tradition of mishteh, drinking, and a passage in the Talmud that is too often used as an invitation to overindulge, said Weinreb, the former executive vice president of the Orthodox Union.
The annual spring holiday commemorates the triumph of the ancient heroes Mordecai and Queen Esther over the evil Haman, who had plotted the destruction of the Jewish people in the Persian Empire. During the festivities, a relevant passage in the Talmud advises celebrants to drink until one cannot distinguish between the phrases “Cursed is Haman” and “Blessed is Mordecai.”
For some, the expression is taken too literally, said Dr. Herbert Rakatansky, a Rhode Island gastroenterologist and a clinical professor emeritus of medicine at Brown University.
“It’s an endorsement of binge drinking, and for teenagers and adolescents, it’s a message,” Rakatansky said. “If it’s OK to drink on Purim, why isn’t it OK to drink like that on other days? On Purim, you drink until you’re drunk, basically.”
In Orthodox communities, the drinking may take place at the local synagogue where men and boys imbibe together. Alex Harlig, a Ph.D. student in dance studies at Ohio State University was recently invited to a “Purim bar hop.”
“I definitely have friends who use the supposed tradition of drinking on Purim as a cue to drink,” she said.
For a community that has only recently started coming to terms to the dangers of alcoholism, the perceived endorsement of drinking on Purim is bad news, according to Jonathan Katz, director of Jewish Community Services at the New York-based Jewish Board of Family and Children’s Services, an organization that includes Jewish Alcoholics, Chemically Dependent Persons and Significant Others (JACS).
“The whole connection with the drinking to excess, and the holiday of Purim, is based on a misreading of the rabbinic texts, and that’s kind of been used as an excuse,” said Katz, whose synagogue once made beer available to adults and adolescents alike.
“It’s quite a serious issue. I think that most responsible Jewish groups regardless of denominations are becoming increasingly aware of that and making efforts to try to limit the danger or the risk involved.”
Ritualized drinking has long been built into Jewish ceremonies, such as the ritual four cups of wine at the Passover seder. Judaism is not alone; within Christianity, the blessing and drinking of sacramental wine is a staple at many Sunday services.
“The myth was because of that controlled or ritually structured drinking, Jews did not have this problem (of alcoholism),” Katz said, “and that really is not the case.”
Through the efforts of organizations like JACS and the advocacy of respected leaders like Weinreb, the Jewish community is starting to “puncture this level of denial,” Katz said.
The Orthodox Union includes a “Purim Safety Alert” on it website, stating in part, “Bodily harm through intoxication is not a mitzvah on Purim, and driving under the influence of alcohol is illegal, leads to impaired judgment, and chas ve’shalom (God forbid), a possible catastrophe.”
Still, the temptations presented by Purim continue.
“It’s taken a lot of time to really get through, but I think at this point Jewish communities have reached a whole other level of awareness of the problem,” Katz said.
“But you still do have a lot of denial, and a lot of challenges, with people who don’t want to accept the risk, or who minimize it.”