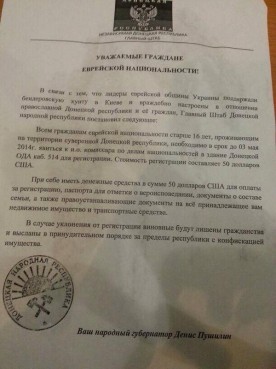 Leaflets ordering Jews in the Ukrainian city of Donetsk to provide a list of property they own and pay a registration fee. Photo courtesy of The Coordination Forum for Countering Antisemitism

Leaflets ordering Jews in the Ukrainian city of Donetsk to provide a list of property they own and pay a registration fee. Photo courtesy of The Coordination Forum for Countering Antisemitism

(RNS) Jews in the eastern Ukrainian city of Donetsk where pro-Russian militants have taken over government buildings were told they have to “register” with the Ukrainians who are trying to make the city become part of Russia, according to Israeli media.

Jews emerging from a synagogue say they were handed leaflets that ordered the city’s Jews to provide a list of property they own and pay a registration fee “or else have their citizenship revoked, face deportation and see their assets confiscated,” reported Ynet News, Israel’s largest news website.

Donetsk is the site of an “anti-terrorist” operation by the Ukraine government, which has moved military columns into the region to force out militants who are demanding a referendum be held on joining Russia.

The leaflets bore the name of Denis Pushilin, who identified himself as chairman of “Donetsk’s temporary government,” and were distributed near the Donetsk synagogue and other areas, according to the report.

Pushilin acknowledged that flyers were distributed under his organization’s name in Donetsk, but denied any connection to them, Ynet reported in Hebrew.

Emanuel Shechter, in Israel, told Ynet his friends in Donetsk sent him a copy of the leaflet through social media.

“They told me that masked men were waiting for Jewish people after the Passover eve prayer, handed them the flyer and told them to obey its instructions,” he said.

The leaflet begins, “Dear Ukraine citizens of Jewish nationality,” and states that all people of Jewish descent over 16 years old must report to the Commissioner for Nationalities in the Donetsk Regional Administration building and “register.”

It says the reason is because the leaders of the Jewish community of Ukraine supported Bendery Junta, a reference to Stepan Bandera, the leader of the Ukrainian nationalist movement that fought for Ukrainian independence at the end of World War II, “and oppose the pro-Slavic People’s Republic of Donetsk,” a name adopted by the militant leadership.

The leaflet then described which documents Jews should provide: “ID and passport are required to register your Jewish religion, religious documents of family members, as well as documents establishing the rights to all real estate property that belongs to you, including vehicles.”

Consequences for non-compliance will result in citizenship being revoked “and you will be forced outside the country with a confiscation of property.” A registration fee of $50 would be required, it said.

Olga Reznikova, 32, a Jewish resident of Donetsk, told Ynet she never experienced anti-Semitism in the city until she saw this leaflet.

“We don’t know if these notifications were distributed by pro-Russian activists or someone else, but it’s serious that it exists,” she said. “The text reminds of the fascists in 1941,” she said referring to the Nazis who occupied Ukraine during World War II.

Michael Salberg, director of the international affairs at the New York City-based Anti-Defamation League, said it’s unclear if the leaflets were issued by the pro-Russian leadership or a splinter group operating within the pro-Russian camp.

But the Russian side has used the specter of anti-Semitism in a cynical manner since anti-government protests began in Kiev that resulted in the ousting of Ukraine’s pro-Russian former president Viktor Yanukovych. Russia and its allies in Ukraine issued multiple stories about the the threat posed to Jews by Ukraine’s new pro-Western government in Kiev, Salberg said.

Those stories were based in part on ultra-nationalists who joined the Maidan protests, and the inclusion of the ultra-nationalist Svoboda party in Ukraine’s new interim government. But the threat turned out to be false, he said.

Svoboda’s leadership needs to be monitored, but so far it has refrained from anti-Semitic statements since joining the government, he said. And the prevalence of anti-Semitic acts has not changed since before the Maidan protests, according to the ADL and the Ukrainian Helsinki Human Rights Union, which monitors human rights in Ukraine.

Distributing such leaflets is a recruitment tool to appeal to the xenophobic fears of the majority, to enlist them to your cause and focus on a common enemy, the Jews,” Salberg said.

And by targeting Donetsk’s Jews, they also send a message to all the region’s residents, Salberg said.

“The message is a message to all the people that is we’re going to exert our power over you,” he said. “Jews are the default scapegoat throughout history for despots to send a message to the general public: Don’t step out of line.”