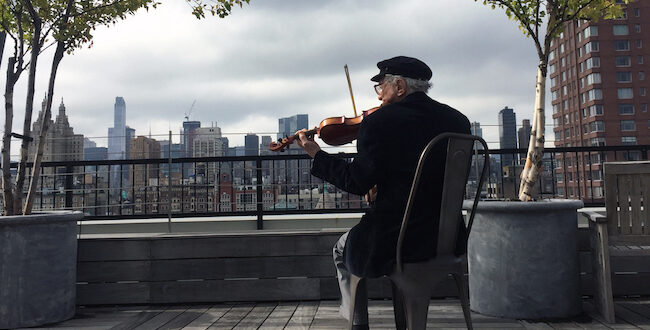 Scene from Fiddler: A Miracle of Miracles/ROADSIDE ATTRACTIONS

What is a Jewish film festival’s purpose? To introduce audiences to a few examples of the limitless ways people can be Jewish? Is it primarily a teaching tool? A way to advocate for justice? Or just a showcase for good stories told through cinema? Jewish Family Services’ film festival committee has put much thought in the last few years into this question: What should guide our film selection process? Increasingly, our answer is: We want the films we choose to reflect our organization’s values, the things our volunteers, donors, board, and director (full disclosure: that’s me) try to bring to the Inland Northwest through our work.

So how do the films we’re showing this year reflect our values? Our opening night selection, “Fiddler: A Miracle of Miracles,” explores the enduring relevance and popularity of the classic Broadway musical “Fiddler on the Roof.” In the process, it makes a strong argument for the importance of family. Through all their squabbling and worrying and aspiring to better things, Tevye and his wife and daughters exemplify the power of family in general and Jewish family in particular. Even interfaith marriage, in Tevye’s time and place a huge schande, can’t completely break the clan’s familial bonds. The documentary also emphasizes the musical’s theme of facing injustice by comparing the persecution of Tevye’s family in 19th-century Russia with civil rights struggles in 1960s America (the era that gave birth to “Fiddler”) and the plight of modern-day refugees.

In examining the global and multigenerational impact of “Fiddler,” the documentary brings to light the ways in which Jewish values parallel universal values. While JFS serves a great many Jewish clients, our organization serves non-Jews, too. As Mark Hetfield — the director of HIAS, the largest Jewish refugee resettlement agency — likes to say, his organization has transitioned “from helping refugees because they were Jewish to helping refugees because we are Jewish.” Judaism commands us to treat people with lovingkindness and repair the world — not just our little corner of it.

Our Saturday night film, “The Light of Hope,” tells another true and little-known story, albeit through a fictionalized lens. Its heroine, the Swiss Red Cross nurse Elisabeth Eidenbenz, converted an old villa in southwest France into a maternity clinic that served as a refuge for hundreds of women and children fleeing Franco’s Spain and Hitler’s Third Reich. In addition to underscoring values like family, justice, and the importance of helping those in need, the film also points up the Jewish value of viewing history as a crucial reference point for the present and future. History powerfully informs the work JFS does each day to help people dealing with hardship. After all, as Jews we know all too well the pain of struggling in isolation, without helping hands extended our way. We can’t and won’t let the same thing happen to others.

Our Sunday matinee, “The Unorthodox,” recounts yet another true story, about the birth, in the 1980s, of a Sephardic political party in Israel. Like “The Light of Hope” and “Fiddler,” the film resonates beyond just Sephardic Jews or Israel because it contains universal (and very Jewish) themes. Along with broader ideas of justice and repairing the world, “The Unorthodox” stresses the values of resilience and fighting for the rights of minority groups. The film, which racked up four Israeli Academy Awards, shows what even a small organization can do with enough passion, resolve, and tenacity. I like to think JFS fits that description, too.

In everything we do to assist clients — many of whom belong to overlooked or marginalized groups, such as seniors, low-income individuals, and people with disabilities — we encourage them to grow in self-reliance, actively seek change for themselves and others, and find sustainable solutions that ultimately empower them. JFS has consulted with hundreds of clients over the years, and our goal is always to identify and bolster clients’ strengths and send them back into the world with more solid footing.

It’s worth noting that all three films are quite entertaining. The joyful musicality and humor of the “Fiddler” documentary, the suspense and inspiring arc of “The Light of Hope,” and the uniquely Israeli vigor of “The Unorthodox” all make for first-rate big-screen viewing. And if that doesn’t convince you, consider that on opening night we’ll have light appetizers at 6:30 p.m. and live klezmer music, courtesy of Spokane’s sensational Meshugga Daddies, from 6:45 to 7:15 p.m.

Then we’ll have a live video call with Valerie Thomas, who co-wrote and co-produced “Fiddler: A Miracle of Miracles” and will introduce her film. After the screening, we’ll raffle off DVDs, CDs, and books related to “Fiddler on the Roof.”

Saturday evening, the director of Eastern Washington University’s Spanish program, Natalia Ruiz-Rubio, will introduce “The Light of Hope” in the context of Spanish history. On Sunday, before and after we screen “The Unorthodox,” attendees can check out an exhibit on Sephardic Jews in the Northwest thanks to the Washington State Jewish Historical Society.

Whether you’re a member of the local Jewish community or just someone who wants to learn about Jewish history, culture, and — wait for it — tradition, I hope you’ll consider attending the festival. If you’re interested, please visit http://sajfs.org/our-programs/sjcff/ for information, trailers, and tickets.

Previous St. Luke’s Orthodox Celebrates Theophany with Outdoor Water Blessing
Next For open minds, Spokane is home to a diverse religious tradition that should be celebrated