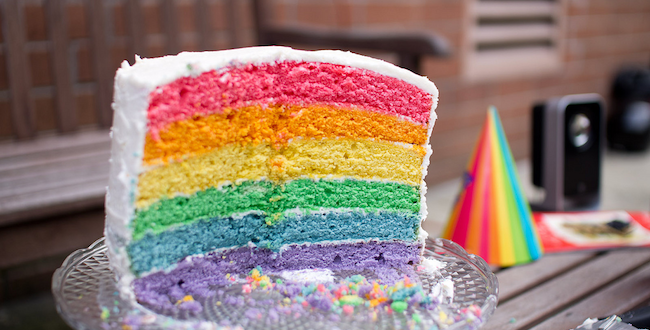 “Jesus would bake the cake”

I heard the quiver in his voice when he spoke about the pain the Supreme Court cake case has caused his family and my heart goes out to him. Being forced to do something your gut says is wrong can be sickening.

I heard the same quiver in my mother’s voice when she learned she had a gay daughter. She couldn’t reconcile her faith with this kind of motherhood, so she left. I grew up practicing the same faith my mom did, so I understood her abandonment.

And I sympathize with Phillips. He can’t reconcile his Christianity with his art and his business. But I have to agree with all those who say, “Jesus would bake the cake.”

Last year I called a counselor here in Spokane. I wanted to work through my mother’s rejection and through the unusual religious upbringing I had. The counselor, though, said she didn’t work with gay people.

I was glad I found out before I sat on her couch, but those words stung.

In that moment I learned the pain of discrimination. It made me feel small, unprotected and rejected all over again – woes Jesus doesn’t stand for.

Those are the same feelings Dave Mullins and Charlie Craig felt when Phillips denied them a wedding cake. Yes, they could go to a different baker. But this is about something much deeper.

“This isn’t about a cake, it’s never been about a cake. This is about freedom, freedom for LGBT people to live full lives in public and not be in constant fear and be denied basic services in businesses or be fired from their jobs or lose their homes just for who they are,” Mullins said recently after justices heard oral arguments on the case.

I’m grateful I live in Washington state where I have protections other LGBT folk in our country don’t have. In 28 states a person still can be legally fired from a job, or be evicted from an apartment, just for being gay. Our gay neighbors in Idaho have no employment, housing or public accommodation rights and they can be denied credit and lending services based on their sexual orientation.

By allowing this, the government is agreeing with Phillips’ lawyers, who say that discrimination on the basis of race is different from LGBT discrimination because it’s based on “who the person is.”

I’m gay just as much as I’m Caucasian and red-headed.

This case is also about dignity. As retired Episcopal Bishop Gene Robinson recently wrote, “The principle at stake is whether or not gay, lesbian, bisexual, transgender people are going to be accorded the same public dignity that is available to everyone else – whether or not such treatment is commensurate with the personal opinions and even theologies of the vendors.”

We should be proud of who we are, but it can be hard when we keep getting turned away.

I was nervous to write this column. I don’t often talk about my sexuality because I’m fearful of losing the things I have left: friends, readers, respect. I’ve written about the importance of sharing my own story and I can’t think of a more important time to do so than when LGBT freedom is at stake.

I hope that when this case finally ends the justices will have put an end to legal discrimination, Phillips will come to understand that he can run a business while still being a faithful Christian, and that it will inspire parents like mine to know that their gay children deserve a family, as much as they deserve cake.

Visit My Website
View All Posts
Previous Do you believe in Christmas?
Next Vanity, all is Vanity (Fair)