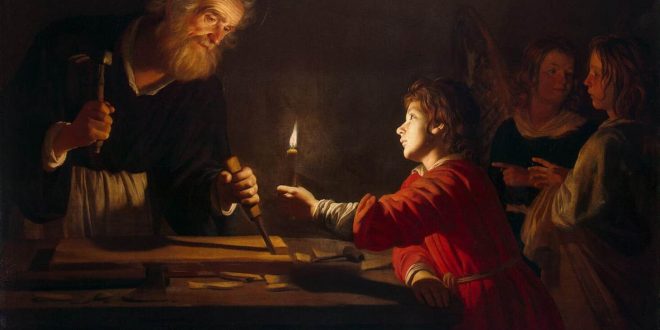 Jesus and God as father

Then Joseph got up, took the child and his mother by night, and went to Egypt… – Matthew 2:14

Earlier this week, Phoebe and I sat down with our two older children to watch the 1984 slapstick film Top Secret! Watching that thoroughly goofy movie as a family was a joyous – and maybe even a slightly wistful – experience. Phoebe and I both saw Top Secret! for the first time when we were more or less twelve, when we were the age that our son is now. And so watching it together felt like a kind of beautiful anachronism; it was as though we all had the fleeting opportunity to be twelve together. (It probably helped that Top Secret! is a movie built with a twelve-year-old’s sense of humor in mind.)

As Phoebe and I watched the movie, we realized that we were delighting both in the film itself (I am relieved to tell you that, unlike many films of my childhood, Top Secret! has aged well) and also in our children’s reaction to it. To put that another way, we watched not just the movie but we also watched our kids watching the movie. And experiencing their surprise and their laughter was at least as life giving, at least as generative for us, as anything that happened onscreen.

The most common metaphor that the Christian tradition uses when speaking about God is Father. It’s a metaphor that doesn’t work for everyone. In part, that’s because “Father” holds the risk of implying that God is male and, therefore, that maleness is somehow closer to divinity. And in part it’s because not everyone had or has the best relationship with their dads. For lots of folks, a father is someone who was or is absent or angry or abusive. Or maybe, all three.

My guess and my hope and my faith is that, when Jesus speaks of his Father – when he invites us to use the same language when we speak of God or to God – that he is using the name Father in the best and the most generous way that it can be used. Jesus doesn’t mean, in other words, that God is a man. And nor does he mean that God is unreliable or that God is an object of fear. Rather, drawing on his own life, what Jesus means is that God is like Joseph: that God is dependable and loving and filled with compassion and good.

We don’t get to spend a whole lot of time with Joseph in the Gospel. Indeed, even though he typically gets a few lines in the Christmas pageant, Joseph actually doesn’t say anything in scripture. But what we do hear about him tells us plenty. Joseph listens to God and, thereby, he chooses to stick with his pregnant fiancé, notwithstanding how great the scandal or the social cost may be to him. He keeps Mary and the young Jesus safe even as a brutal government seeks to end their lives. And tradition has it that he teaches the young Jesus carpentry, the trade that will sustain him until his public ministry begins.

Imagine Jesus holding a chisel or a saw or a hammer for the first time. There he is: making his first halting cuts into timber, driving his first few nails into a table or a box or a chair, his tongue sticking out the corner of his mouth in concentration. And imagine as well Joseph watching him, Joseph rejoicing in Jesus’ learning and discovery and happiness.

Their eyes meet then: Jesus and Joseph, the old man and the young boy. And Jesus sees that his Dad is looking at him with unreserved approval and love, with delight. Jesus sees that, in him, his Dad is well pleased.

And so Jesus will look up to heaven, and he will call God Father.

Previous The Islamic State group has weaponized children
Next Ask An Evangelical: Where does hate come from?

Many Quakers speak of both heaven and hell as potential afterlife destinations, with heaven or some positive afterlife in the presence of God being far more commonly referred to in Quaker circles than hell.