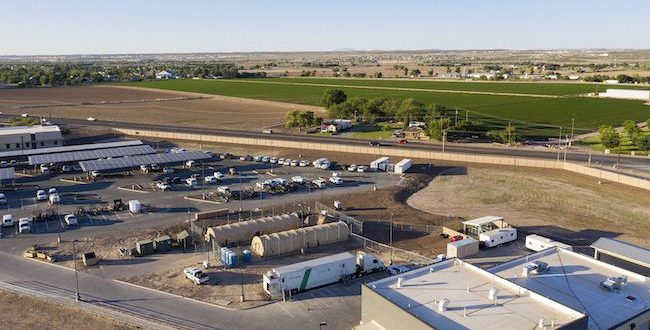 Jesus and Children in Cages

Reports about U.S. government treatment of children in concentration camps near the border are horrifying.

The NY Times describes that at a camp in Clint, Texas, children “as young as 7 and 8, many of them wearing clothes caked with snot and tears, are caring for infants they’ve just met … Toddlers without diapers are relieving themselves in their pants. Teenage mothers are wearing clothes stained with breast milk.” Elora Mukherjee, director of Columbia Law School’s Immigrants’ Rights Clinic, said guards at this camp wore face masks because the conditions were so unsanitary. In her 12-year career, these were the worst conditions she had ever seen.

Law professor Warren Binford visited the same camp and notes in a PBS report, “It’s the worst conditions I have ever witnessed in several years of doing these inspections.” In a New Yorker interview, she mentions that the facility has a capacity for 104, but is currently holding 350 children, and that many of these had been there for more than three weeks. “They told us that they were hungry. They told us that some of them had not showered or had not showered until the day or two days before we arrived. Many of them described that they only brushed their teeth once.” She relates an episode about a lice outbreak:

And so they were given a lice shampoo, and the other children were given two combs and told to share those two combs, two lice combs, and brush their hair with the same combs, which is something you never do with a lice outbreak. And … one of the combs was lost, and Border Patrol agents got so mad that they took away the children’s blankets and mats. They weren’t allowed to sleep on the beds, and they had to sleep on the floor on Wednesday night as punishment for losing the comb… a whole cell full of kids … were forced to sleep on the cement.”

In a medical declaration, physician Lucio Sevier describes conditions at a camp in McAllen, Texas as comparable to “torture facilities.” She notes that of the 39 children she evaluated, every child showed evidence of trauma. The facility, she observed, “felt worse than jail.” Conditions for infants, she notes, are even worse. Seven allegations of sexual abuse against children have emerged from one Florida migrant “shelter” (a euphemism if there ever was one). In the last four years, the federal government has received 4,500 complaints of sexual abuse or harassment against immigrant children in detention centers.

Against this backdrop, DOJ lawyer Sarah Fabian had the gall to defend this Dickensian squalor, arguing before the Ninth Circuit Court of Appeals that “safe or sanitary” conditions do not necessitate providing children with a toothbrush, soap, or proper sleep.

We are witnesses to a dystopian horror. The death of decency is becoming our new soul numbing reality. If we can harm children in this manner, is there any limit to what we will do? Outrage over naming these centers “concentration camps” (terminology that scholars such as Andrea Pitzer and Anna Lind-Guzik defend) reveals an unwillingness to face the ugly possibility that our nation is systematically abusing and terrorizing children. How many children? According to acting Homeland Security Secretary Kevin McAleenan, in May and June, 60,000 children entered DHS custody.

One of my interests as a professor of religious studies is the interplay between biblical texts and contemporary life. It seems relevant in our current context that one of the easiest ways for the Bible to demonize someone is to describe them as harming children. Two of the arch villains in the Bible, Pharaoh and King Herod, are depicted as attempting to kill young children (Exodus 1:15-22; Matthew 2:16). It is worth noting that Pharaoh’s plan initially fails only because two women dare to disobey his orders. They even lie to Pharaoh, and God rewards them for their disobedience in choosing life over obeying authority. Howard Zinn’s remark, “Our problem is civil obedience,” is especially apt. Saving the lives of children may well require courageous disobedience to our contemporary Pharaoh.

Jesus spoke of children and they are a main focus of much of the fourth discourse in Matthew’s gospel. Jesus says people must become like children to enter the kingdom of heaven, that to be great in the kingdom of heaven one must humble oneself like a child, and that whoever welcomes a child in Jesus’ name actually welcomes Jesus (Matt 18:3-5). The parable of the Sheep (in Matthew’s version, not Luke’s) is about God not wanting any child to be lost.

In this same discourse Jesus delivers his most damning (literally) message about children. Referring to children as “little ones,” he warns, “If any of you put a stumbling block before one of these little ones who believe in me, it would be better for you if a great millstone were fastened around your neck and you were drowned in the depth of the sea” (Matt 18:6). It is the only time Jesus recommends suicide, and he does so as an alternative to hurting a child. What Jesus offers here is not retributive, but preventative justice. Jesus aims to protect children from falling victim to abuse, and he proposes taking one’s own life (and self-mutilation) as a preferable option (Matt 18:7-9).

Jesus concludes the fifth and final discourse in Matthew with a parable of the “Sheep and the Goats” in which he proposes that however one treats the “least” in society (he names the hungry, thirsty, naked, sick, foreigners and imprisoned) is precisely the same way that one treats him (Matt 25:31-46). Jesus further claims that eternal judgement is determined by (and only by) one’s treatment of the most vulnerable in society. The hungry, thirsty, naked, sick, foreigners, and imprisoned. These are the people currently languishing in camps at our border.

Psychologist Erik Erikson once noted, “Someday, maybe, there will exist a well-informed, well considered, and yet fervent public conviction that the most deadly of all possible sins is the mutilation of a child’s spirit.” The United States is in the (profitable) business of systematizing such mutilation. One tortured child at a time.