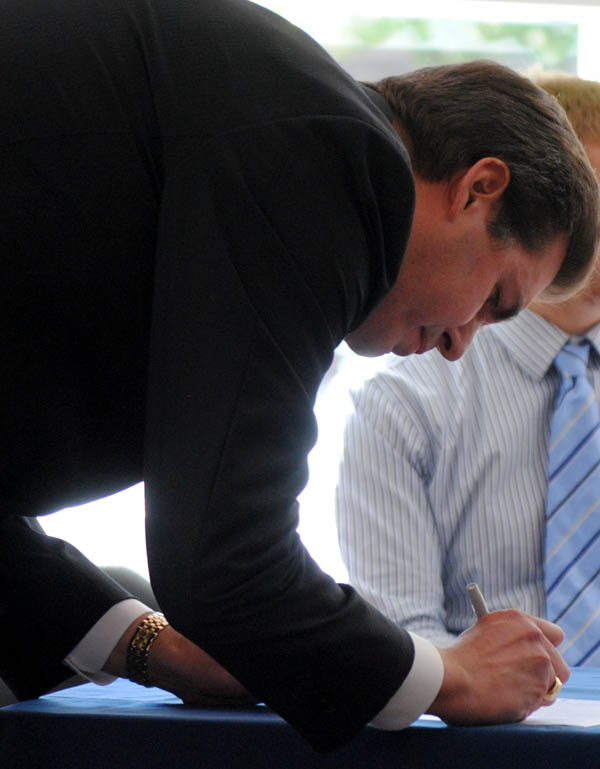 On Oct. 7, I had the privilege of witnessing Gonzaga University President Thayne McCulloh and Gonzaga Prep President Al Falkner sign the St. Francis Pledge to Care for Creation and the Poor, making the Catholic and Jesuit schools partners in the national movement for faithful action on climate change.

The support for sustainability at my alma maters Gonzaga and Gonzaga Prep is strong and growing, which is crucial given the importance of sustainability in both Catholic social teaching and Jesuit values.

We at Gonzaga University recognize our important commitments to protect human life and dignity and to be especially cognizant of the poor and vulnerable who are disproportionately harmed by environmental degradation and climate change. I serve on the Gonzaga Advisory Committee on Stewardship and Sustainability to help contribute to this work.

At the last worldwide meeting of Jesuits, General Congregation 35 (2008), the group defined sustainability as “a commitment to respect and care for the community of life.” The Jesuits called for economic growth that promotes human rights, care for the natural world, and striving for the common good worldwide, especially for the poor and most vulnerable. Sustainability means sustaining ourselves and others without penalizing future generations. It means replacing the use of non-renewable resources with renewable ones and reducing our consumption of all resources. Doing so entails reuse, recovery, recycling, and replenishment or restoration of natural resources.

And it means we must work together with faith.

“Sustainable development will succeed only if it expands to include a vision of sustainable communities which hold all creation as sacred,” the Jesuits noted.

Decree 2 of Jesuit General Congregation 35 notes: “We turn to the ‘frontier’ of the earth, increasingly degraded and plundered. Here, with passion for environmental justice, we shall meet once again the Spirit of God seeking to liberate a suffering creation, which demands of us space to live and breathe.” I concur with the Jesuit leaders who noted that solidarity and shared responsibility will provide solutions to our ecological crisis.

In this spirit of solidarity, Gonzaga strives to be an exemplar of responsible environmental stewardship. In January, President McCulloh approved Gonzaga’s first comprehensive Climate Action Plan, which aims for Gonzaga to achieve climate neutrality — zero emissions — by 2050. Last year, Gonzaga was named an “EPA Green Power Partner” in recognition of the clean and renewable energy it bought in 2011. Gonzaga and campus partner Zag Dining by Sodexo earned 2012 Recycler of the Year for Higher Education Award for reducing waste 25-30 percent. Gonzaga Prep has boosted its sustainability efforts with multiple initiatives, including solar power improvements and the switch this fall to all students using iPads with digital textbooks iPads.

I am proud of my alma maters Gonzaga University and Gonzaga Prep for recognizing the importance of sustainability and taking action to help model what sustainability means.

Join Spokane Faith & Values at 10 a.m., Nov. 2 at Indaba Coffee for Coffee Talk, where panelists will discuss Environmental Stewardship. Tormey is a panelist.

Peter Tormey is the associate director of public relations at Gonzaga University.