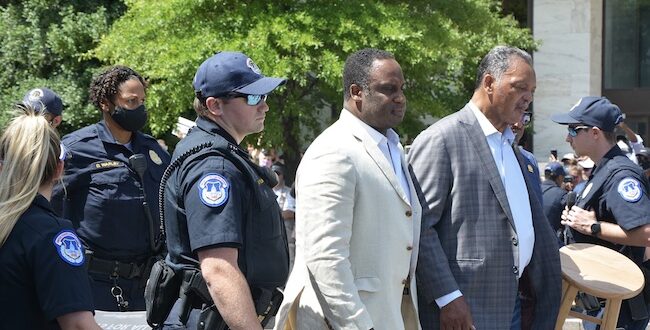 The Rev. Jesse Jackson, right, was arrested alongside the Rev. William Barber II during the protest on June 23, 2021, outside the Hart Senate Building. RNS photo by Jack Jenkins

Shortly before his arrest for blocking the street, Barber stood in the middle of Constitution Avenue as hundreds of demonstrators marched behind him along the sidewalk outside the Hart Senate Office Building. As police began to encircle Barber and others huddled behind a banner that read “Manchin, stop hurting West Virginia: Stop the filibuster,” the pastor explained he was willing to be arrested to protect voting rights.

“It took this to win it, it’s going to take this to keep it,” Barber said.

Jackson, nearby, signaled his own readiness to be detained earlier in the day, saying “we come not as an insurrection group, but as a resurrection group” and “today we must fill up the jails,” before adding “if you call yourself a child of God, you oughta act like it sometimes.”

The arrests were the culmination of two-hour-long demonstration that began a block away outside the U.S. Supreme Court. There, faith leaders and activists spoke out against the recent failure by the Senate to take up voting rights legislation, known as the For the People Act, which would undo recent limits on mail-in voting and poll hours passed in Georgia and other states.

On Tuesday, a motion to debate the bill failed, as the senators deadlocked at 50-50. Advocates of the For the People Act, including Barber, have urged Manchin to agree to change Senate rules to eliminate the filibuster, which would allow Democrats to pass the bill with a simple-majority vote. Manchin and another Democrat, Sen. Kyrsten Sinema of Arizona, have vowed to keep the rule in place.

Barber singled out Manchin on Wednesday, saying, “We are also here to say to Manchin: Any so-called Democrat who claims to support the non-constitutional filibuster over the constitutional guarantee that no state can deny or abridge the right to vote … you are assisting the Republicans in their extremism.

“Manchin, don’t you let sin block the salvation of this democracy and its soul.”

Barber chided Senate Minority Leader Mitch McConnell of Kentucky as well — “There’s still time for McConnell to repent,” he said — but he and the other speakers during the day directed most of their ire at Manchin, the focus of pressure from the Poor People’s Campaign for weeks: Last week, the West Virginia chapter of the campaign led a separate march to his offices in the state.

Representatives from the group met with the lawmaker in February at his request after threatening demonstrations. They discussed a $15 federal minimum wage but left the meeting frustrated after Manchin floated a lower figure.

West Virginians were well represented in the crowd outside the Supreme Court, and among the activists from the state who spoke at the rally was Pam Garrison, who decried compromise on voting rights bills. “I don’t remember compromise when the rich were getting tax breaks,“ she said.

Other speakers at the event included Jim Winkler, head of the National Council of Churches, a group that advocates for 38 member communions representing between 30 million and 40 million people — including entire denominations such as the African Methodist Episcopal Church, Episcopal Church and Presbyterian Church (USA).

“The John Lewis Voting Rights Act, the For the People Act, the American Jobs Plan, the $15 hourly wage — these should be passed into law,” he said. “The only way this is going to happen is for the filibuster to go.”

Accompanied by a heavy police presence, the group marched from the court to the Hart building, where the arrests took place while the demonstrators looked on. The action was peaceful, with protesters repeatedly drawing a contrast between their tactics and those who stormed the U.S. Capitol on Jan. 6. When two people began shouting at a Capitol Police officer while Barber was being detained, the North Carolina pastor briefly approached them to deescalate the situation before allowing himself to be led away.

Shortly afterward, a leader closed the protest in prayer, concluding, “This is what a peaceful protest looks like.”

Barber hinted during his remarks that the Poor People’s Campaign is planning more actions for the future, and speakers at the event included mainstream liberal activist groups such as MoveOn.org.

Previous UNDERSTANDING PRAYER: Friendship Sunday to what now?
Next Ask A Muslim: Being Muslim and Speaking Arabic 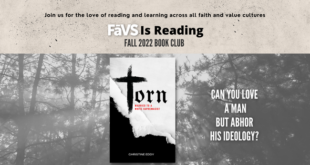