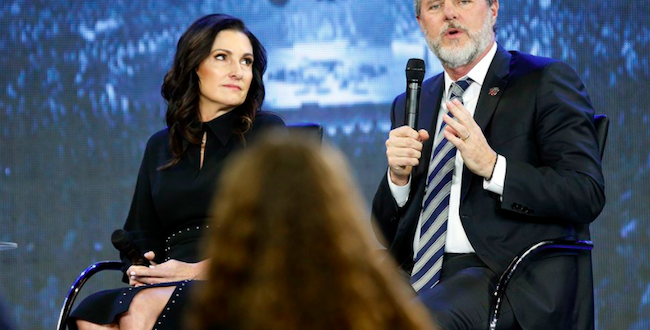 Jerry Falwell Jr., right, answers a student’s question, along with his wife, Becki, during a town hall on the opioid crisis at a convocation at Liberty University in Lynchburg, Virginia, on Nov. 28, 2018. (AP Photo/Steve Helber)

Jerry Falwell Jr.’s fall, Liberty University and the myth of the Moral Majority

No, that’s not Adam’s response to God about Eve eating the apple, but Jerry Falwell Jr.’s explanation of the “affair” between his wife, Becki Falwell, and Giancarlo Granda.

Jerry tried to get ahead of a Reuters story that broke about his wife’s sexual relationship with Granda by giving a preemptive story about her affair.

Turns out Jerry may have had “oversight” of the relationship by watching their sexual relations, inviting Granda on vacation and even listening to Becki and Granda’s conversations, according to Reuters.

This unsavory story says much about the sorry state of evangelicalism.

Morality — and the supposition that evangelicals have it —  is not about personal behavior or piety. Instead, it is a bludgeon to be used against those who do not support evangelical beliefs or policies.

Looking back at Falwell, it is clear that he signaled this shift about evangelicals and morality in his support of President Donald Trump.

The schadenfreude that many are enjoying over Falwell’s fall from “grace” comes from the fact that the son of Jerry Falwell Sr., the man who ran the Moral Majority, has been anything but.

Jerry Falwell Jr. is not an aberration, but a sign of the shift that is happening in the evangelical movement.

It used to be that evangelicals were swift to rid their ranks of anyone who had the whiff of any sexual sin. Now, you can hang around for a long time, or at least until you take a pic with your pants unzipped, holding a drink, with your wife’s very pregnant assistant.

While evangelical churchgoers may cling to and embrace certain conservative biblical interpretations surrounding sexuality and gender, their 21st-century leaders care little for it. Jerry Falwell Jr. is one in a long list of men who’ve had to resign because of sexual dalliances or allegations of misconduct.

They all sought power in many ways, some in the religious realm, but others in the political. In the case of Jerry Falwell Jr., he not only supported Trump but also acted as a surrogate attack dog in defense of Trump’s policies.

Falwell’s fall is another indication of the impotent witness of American evangelicalism.

It’s time to stop pretending that 21st-century evangelicalism is still a movement that believes in sexual morality and values.

It is a political movement with religious people who vote a certain way in order to get the judges, perks and favors that can be given to their leaders through political and economic power. It’s about personal pleasure at the expense of making life miserable for others by legislating a morality that some leaders don’t believe in, nor bother to practice.

Not all evangelicals are like Jerry Falwell Jr., at least in their personal life. One reason he resigned is that a group of Liberty graduates — and eventually the school’s board — had had enough.

Even his own brother seemed to shake his head at the state of evangelical leadership.

“The world doesn’t need another Christian hypocrite,” the Rev. Jonathan Falwell told students at Liberty after his brother’s departure.

Jonathan Falwell, who succeeded his father as pastor of Thomas Road Baptist Church, did not criticize his brother by name in a sermon addressed to students.

Still, his message was clear.

“So many times we see Christians that are more focused on building their own brand than they are about building the kingdom of God,” he said.

Jerry Falwell Jr.’s fall matters because he is the son of Jerry Falwell Sr., the man who put evangelicals on the political and social map of America with the Moral Majority.

His public disgrace — and his apparent lack of contrition or shame — represents the rot in a movement that has never come to grips with its beliefs about sexuality, patriarchy, race and society that have influenced their ranks and American political life.

Evangelicals have sought to make America a Christian nation through education and political action while wrestling with their own desires to break free from the constraints of their conservative upbringings. Sometimes they win. Sometimes, like Falwell, they fail.

While this might be seen as just another sex scandal, I’d say that the fall of Falwell is proof that evangelicals who have fully embraced Trumpism have decided that their desire for power and position outweigh the gospel they claim to love.

In a distasteful final statement, Falwell quipped that he was “free at last” from Liberty.

Hopefully, we are free from him as well.

(Anthea Butler is interim chair of religious studies and associate professor of religion and Africana studies at the University of Pennsylvania. The views in this commentary do not necessarily reflect those of Religion News Service.)

Previous 6 Benefits To An Online Church Service
Next What Is a Purpose Driven Church? Everything You Need to Know

I was afraid to even go to the ER for fear of waiting several hours, possibly being exposed to Covid, and still not getting the care I needed.