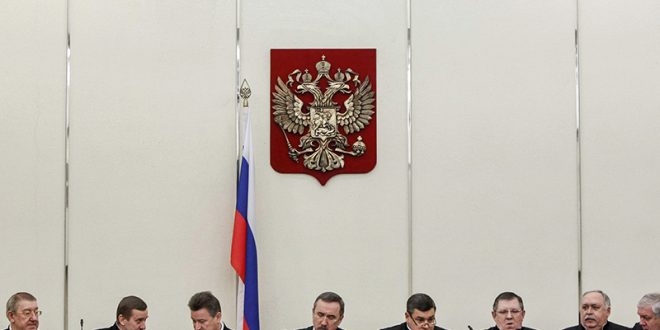 (RNS) Russia’s Supreme Court will soon decide whether to label Jehovah’s Witnesses as an extremist group, a designation members of the faith fear would lead to the shuttering of their more than 2,300 congregations in that country.

The possibility has galvanized many of the world’s 8 million Jehovah’s Witnesses, a minority denomination in every country in which they live, and one that is frequently harassed.

But their experience in Russia, where there are approximately 175,000 Witnesses, has been particularly hostile.

“An imminent ban is in the making,” said Jehovah’s Witness spokesman David A. Semonian. “There are other areas where we have faced challenges, but this is unique.”

Jehovah’s Witnesses, a Christian denomination founded in the U.S. in the late 19th century, is known for its door-to-door proselytizing, but also its rejection of violence and military service.

Jehovah’s Witnesses began a worldwide letter-writing campaign on March 21, days after the Justice Ministry asked the court to rule on the denomination.

Spokane-area Jehovah’s Witnesses are also participating in the letter-writing campaign, and are mailing letters to Russian government officials, including President Vladimir Putin, in protest of an attempt to label the Russian arm of their church an extremist organization.

There are about 2,000 Jehovah’s Witnesses in the Spokane and Couer’d Alene region, and most are expected to participate in the campaign.

The court is scheduled to take up the case on April 5.

“We’re very hopeful that it will have an impact with the Russian officials,” Semonian said of the letter-writing campaign, “and they will see that Jehovah’s Witnesses are not threats when it comes to the government — that we’re a peaceful people and that we contribute to the Russian people.”

Jehovah’s Witnesses have already been banned in some areas of the country, where local officials consider their literature and criticism of the Russian Orthodox Church a form of incitement.

While the group has been cast as particularly threatening by Russian government officials who have raided their churches, other religious groups have also been curtailed.

An anti-evangelizing law that went into effect last summer limits church activity to church buildings and requires permits for missionaries, among other restrictions.

Russian President Vladimir Putin has billed himself as a champion of Russia’s majority denomination, the Russian Orthodox Church.

Previous Trying to Stay United in a Divided World
Next Jesus: the Marketing Plan