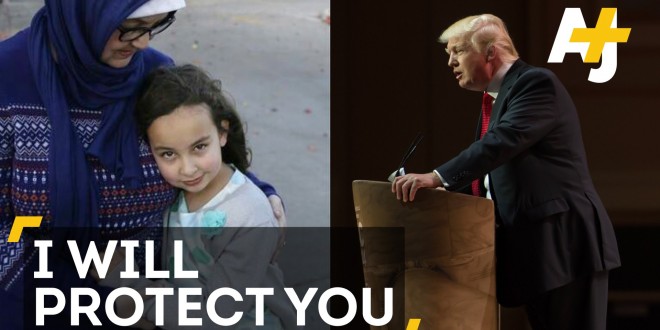 U.S. service members are using the hashtag #IWillProtectYou to show support for a young Muslim girl who believed her family would be forced to flee following Donald Trump’s call to ban Muslims from the country.

Melissa Chance Yassini of Dallas said she came home Dec. 8, to find her 8-year-old daughter packing her bags, “Upworthy” reported. Yassini said her daughter was terrified after she heard Trump call for a ban on all Muslims entering the country following the San Bernardino massacre.  “Sad day in America when I have to comfort my 8-year-old child who heard that someone with yellow hair named Trump wanted to kick all Muslims out of America,” Yassini wrote in a Facebook post on Dec. 9. In response to Trump’s words, Yassini said her daughter began “collecting all her favorite things in a bag in case the army “came to remove the family from their home.” “She checked the locks on the door 3-4 times,” Yassini wrote. “This is terrorism. No child in America deserves to feel that way.”

The post quickly went viral, and it wasn’t long before Army veteran Kerri Peek saw it, according to Australian Broadcasting Corporation.

“Post a picture of you in uniform with the hashtag‪#‎IWillProtectYou‬ to let these children know that we will not hurt them,” Peek wrote in a Dec. 17 Facebook post. “That they are safe here in America. That we will protect innocents as we always have.”

Peek’s friends answered her call, and soon others did too. On social media, U.S. service members are sharing photos and pledges to make Yassini’s daughter and all Muslims feel safe in the U.S.

On Twitter, one man wrote “No one should be scared to live in a country because of their faith,” with the hashtag #IWillProtectYou.

Yassini said she and her daughter are overwhelmed by the support.

“I have probably received close to 500 messages from various people in our military, from just people,” Yassini told “Upworthy.” “Christians, atheists, Jews, every walk of life, every stage, have reached out to Sofia and I with overwhelming support and love.”

Previous How does the Jesus story influence today’s refugee story?
Next No, It Is Not Better To Give