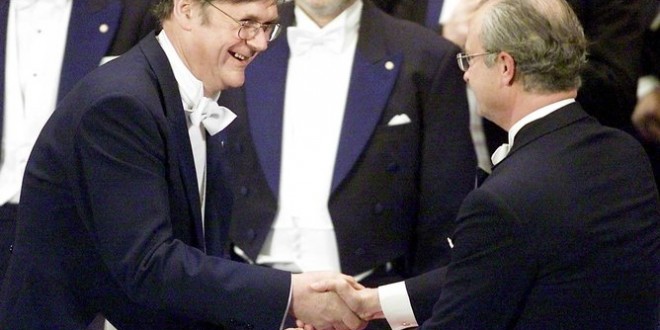 PEN04 - 20011210 - STOCKHOLM, SWEDEN : Britain's Tim Hunt (L) from the Imperial Cancer Research Fund in London receives the Nobel Prize for medicine from King Carl XVI Gustaf of Sweden on Monday, 10 December 2001, at the Concert Hall in Stockholm. Hunt won the prize jointly with Britain's Sir Paul Nurse and Leland Hartwell from the US for their work in 'Key regulators of the cell cycle' in the Nobel 100th anniversary year. EPA PHOTO EPA/GERRY PENNY/gp/mr

I’m not sure whether I’m weeping tears of laughter or sorrow at the comments made by Nobel Laureate and English biochemist Tim Hunt. Poor man – he certainly has stirred up a storm of debate following his inadvised remarks about single-sex laboratories and women crying when criticised.

I say poor man, but I don’t really feel sorry for him. He should have known better. OK, it is important to have a sense of humour, and most people are able to laugh when someone makes a light-hearted joke at their expense. But there are limits, especially when addressing a group of people that you don’t know very well, who might have different social or cultural reference points. Someone as senior as Hunt should have realised that his remarks were going down like a lead balloon, and been able to change the tenor of his comments.

There are (at least) two aspects of Hunt’s remarks to take issue with. The first is about workplace relationships: “Let me tell you about my trouble with girls … in the lab … You fall in love with them, they fall in love with you”. In saying this, he seems to be marking laboratories out as seething dens of sexual iniquity. [Humorous aside: chance would be a fine thing …].

OK, perhaps I’m exaggerating a bit – though I did meet my husband when we were sharing a laboratory as fellow PhD students. We celebrate our 29th wedding anniversary this year. Because of university administration cycles, for several years he was my boss, then I was his boss. We still work together, publish together and collaborate on a variety of projects. Sometimes, workplace romances can even serve as a source of inspiration rather than distraction.

But laboratories are certainly not the only workplaces in which colleagues form relationships. Indeed, workplace relationships are so commonplace that reports have been written about their effect (positive and negative) on the work environment. There is even a Wikipedia entry about the subject, which cites a number of references to academic papers.

Before the spread of online dating sites, the workplace was one of the main locations where partnerships formed. If we take Hunt’s comments to its logical conclusion, then all workplaces should be segregated on the basis of sex. Gosh, where does that leave consideration of our LGBT friends and colleagues?

The second comment which deserves debate is the assertion that “women start crying when you criticise them”. As far as outrageous and outdated sexist comments go, this must be fairly close to the top. This to me is more serious.

I was reduced to tears following a reprimand – once. The person who criticised me was several years older, and several grades more senior. He was notorious for his bullying tactics. I was furious – with him, and also with myself for caring about what he had said. There is no excuse for being so destructive that a woman, or man, is reduced to tears.

If you know you have to deal with someone who doesn’t take criticism easily, then temper how you speak to them. That isn’t having to hold back, but is showing a sensitivity that will get much better results than boosting your own ego by causing someone to cry.

As far as I am aware, I have never reduced any of my colleagues to tears following a reprimand. And if I have, it was inadvertent and I apologise. There are much better and more effective managerial tools: praise, discussion, suggestion of alternative approaches to problem solving.

As others have pointed out, Hunt may be of a previous generation, where there were fewer women in senior positions. But that is not an excuse for his comments. I see from his biography that he is married to a fellow scientist. The biography does not say whether they were laboratory colleagues … I wonder what they’ll be discussing over the dinner table tonight.

Monica Grady is Professor of Planetary and Space Sciences at The Open University.

Previous Ask a Buddhist: What has Buddhism Done for You?
Next Parenting with the Cross