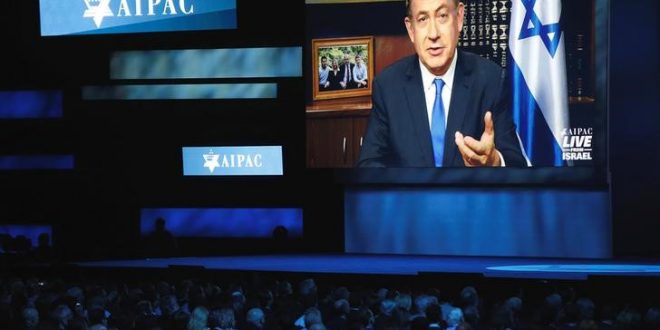 Israel’s Netanyahu pledges to work with Trump on peace efforts

WASHINGTON (Reuters) – Israeli Prime Minister Benjamin Netanyahu said on Monday he was committed to working with U.S. President Donald Trump to advance peace efforts with the Palestinians and with the broader Arab world.

Netanyahu made the pledge in a speech to the largest U.S. pro-Israel lobbying group at a time when the Trump administration is seeking agreement with his right-wing government on limiting settlement construction on land the Palestinians want for a state, part of a U.S. bid to resume long-stalled peace negotiations.

But Netanyahu, speaking via satellite link from Jerusalem, avoided any mention of the delicate discussions, and stopped short of reiterating a commitment to a two-state solution to the decades-old Israeli-Palestinian conflict.

“Israel’s hand and my hand is extended to all of our neighbors in peace,” Netanyahu told the annual convention of American Israel Public Affairs Committee, or AIPAC. “Israel is committed to working with President Trump to advance peace with the Palestinians and with all our neighbors.”

But he repeated his demand that the Palestinians recognize Israel as a Jewish state, something they have refused to do.

Netanyahu heaped praise on Trump, who has set a more positive tone with Israel than his Democratic predecessor, Barack Obama, who often clashed with the Israeli leader.

He thanked the new Republican president for a recent U.S. budget request that “leaves military aid to Israel fully funded.” He also expressed confidence in a U.S.-Israeli partnership for preventing Tehran from developing a nuclear weapon, following its 2015 nuclear deal with world powers, and for “confronting Iran’s aggression in the region.”

On the settlements issue, a round of U.S.-Israeli talks ended last Thursday without agreement. Gaps remain over how far the building restrictions could go, according to people close to the talks.

Netanyahu’s coalition is grappling with divisions that have sparked speculation that he could seek early elections.

Many Israelis had expected Trump, because of his pro-Israel campaign rhetoric, to give a green light for settlement expansion in the occupied West Bank. But Trump unexpectedly urged Netanyahu last month to “hold back on settlements for a little bit.”

There is skepticism in the United States and Middle East over the chances for restarting Israeli-Palestinian diplomacy. Peace talks have been frozen since 2014.

Most countries consider Israeli settlements, built on land captured in a 1967 war, to be illegal. Israel disagrees, citing historical and political links to the land, as well as security interests.

Trump has expressed ambivalence about a two-state solution, the mainstay of U.S. policy for the past two decades, but he recently invited Palestinian President Mahmoud Abbas to visit.

Previous Dear Exhausted Evangelical: I was Terrified of Hell
Next Is persecution God’s gift to us?