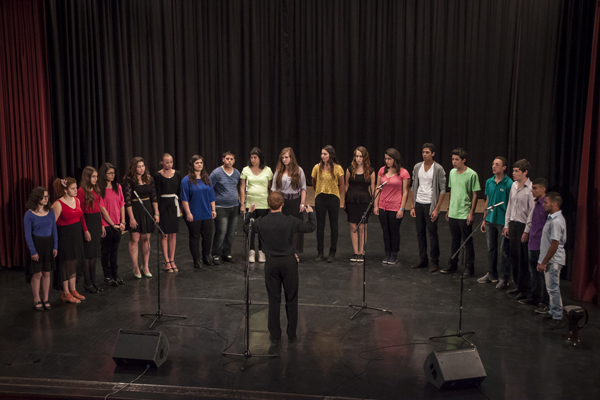 JERUSALEM (RNS) While attending a U.S.-based interfaith camp as a teen, Micah Hendler had an idea.

What would happen if he launched an Israeli-Palestinian choir that encouraged Jerusalem-area Israeli and Palestinian high school students to make music and engage in dialogue?

Two years ago, the 24-year-old Maryland-born Yale graduate moved to Jerusalem to do just that.

Hendler knew several of the coexistence projects that once flourished in the city had collapsed under the weight of Palestinian terror attacks and Israeli military incursions. And he knew the work wouldn’t be easy.

But he had studied music and international studies, sung with the Yale Whiffenpoofs, and directed a number of ensembles, including the Duke’s Men of Yale, an all-male collegiate a cappella group.

More pertinent, in high school he had apprenticed with Ysaye Barnwell, a composer who was then a member of an African-American women’s vocal group, Sweet Honey in the Rock. Barnwell led events called community sings in which she taught songs of social justice and community building by ear in multiple parts to mostly untrained singers. He planned to use her techniques.

The first thing he did was contact area schools. Many didn’t want to participate.

“I went class by class, giving presentations in Hebrew and Arabic, trying to make the choir sound like the coolest thing in the world,” he said.

Ultimately, 80 students auditioned and 30 were chosen.

The criteria: musical talent, but also open-mindedness toward learning about new perspectives.

The YMCA Jerusalem Youth Chorus is the result.

The program, whose ultimate goal is to create a cohort of thoughtful, tolerant young leaders, takes place at the Jerusalem International YMCA, one of the few places in this contentious city where Jews and Arabs frequently form close friendships.

The musical component, which includes multicultural songs sung in Arabic, Hebrew and English, is fairly straightforward, despite the fact that Hendler and the teens are constantly juggling languages.

The dialogues are more complicated, but not due to linguistics.

“Essentially, the program is designed to provide a safe space for the participants to explore one another’s identities, histories and life experiences, even regarding sensitive issues like the conflict,” Hendler said during a rehearsal, emphasizing that trust can’t be built overnight.

“You start slowly, not with 1948,” he said referring to the year Israel was created, an event Arabs call “al Nakba,” or “the disaster.”

“Instead, you start with an exploration of where people come from, what makes them who they are. Then you start getting into some of the issues surrounding nationality, citizenship, which takes you into the conflict from a personal direction.”

Once the Arab teens begin to see the Jewish teens as friends and vice versa, “they broaden that understanding to the wider group” of Arabs and Jews, Muslims and Christians.

The choir has continued to meet even during the toughest of times.

Hendler recalled how in 2012, just a month after the choir was launched, Israeli troops entered Gaza in an attempt to stop Palestinian rocket fire into Israeli population centers. Israelis felt the incursion was justified; Palestinians accused Israel of excessive force.

At one point during the fighting “rockets were falling near Jerusalem,” the music director said, “but the choir met anyway. Defiantly so.”

Avital Maeir, who is Jewish and Israeli, said she decided to join the choir “to show that Muslims, Christians and Jews can work together. Actually, it’s happening already, but most people don’t know about it. “

Maeir, who lives in a neighborhood that skirts East and West Jerusalem and is home to both Jews and Arabs, noted that she has many Arab neighbors.

“We hang out together,” she said.

Yasmin Khoury, a Christian Arab who lives in a predominantly Jewish neighborhood in West Jerusalem, and attends the city’s only Arabic-Hebrew school, said she enjoys the choir’s mandatory dialogue encounters.

“There are a lot of special kids here, Jews, Muslims and Christians together,” she said. “We talk about the conflict. We talk about what Arabs and Jews have done wrong, and we don’t always agree. We agree to disagree.”

Obied, who must pass through Israeli military checkpoints, said his “negative preconceptions” of Israelis as a whole “haven’t changed” since he joined the choir.

“My relatives and I feel persecuted by the Israeli police and soldiers. But at the same time, I feel that the Jews in the choir are different. Here I feel like I’m an equal,” Obied said.

Previous POLL: Do you agree with Inslee’s decision to suspend the death penalty?
Next Seminary buys robot to study the ethics of technology