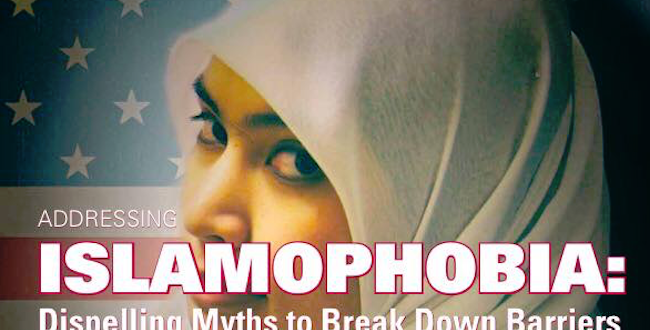 Islamophobia under the Reflexive Shell

Amer F. Ahmed gave a talk this week at Whitworth University on Islamophobia that I attended as a SpokaneFāVS contributor.

As a non-believer and secularist who thinks that blasphemy laws are intrinsically, universally abhorrent and that individual conscience to be free to believe without coercion or pressure is at the very core of what it means to be a freethinker, I was happy to see the largely college-student audience attending Ahmed’s talk popularly rejecting the Islamophobia that was his subject.

That said, there were other observations to be made regarding peoples’ approach to history given their social context.

Only one serious nay-saying question occurred afterward, as an older gentleman objected to Ahmed’s recommendation of CAIR (the Council on American-Islamic Relations) as a defender of the Muslim public image.

That touched on a dicey subject, as there is at the moment a contentious polarity between the conservative Kulturkampf ideology of Islamophobic groups like Jihad Watch and what I can only classify as the rationalizing apologetics of CAIR concerning how much of the Islamic tradition and current practice has elements of violence or intolerance within them, and how that came about.

That the early spread of Islam involved more than just docile persuasion disappeared on Ahmed’s historical scope, and such punitive matters as the special tax (the jizya) that applied only to non-believers was alluded to briefly and passingly.

Ahmed suggested that such extremism was merely cultural baggage, not a part of real Islam after all. Which begs the question, of course, whether any religious doctrine is anything other than cultural baggage — something someone thought up at some point and which their culture adopted (not always peacefully) with inevitable variations.

The “No True Scotsman” approach of minimizing the theological roots of fundamentalist excesses of the faith occurs as readily among Christians as patriotic American Muslims, of course, but it is no less a slippy-slide down tunnel-vision historical revisionism.

Oh, yes, and there is “colonialism.” Ahmed took great pains to attribute the bumpy edges of Western-Islamic interactions to the colonial legacy.

I’d agree that you cannot appreciate much of so many contemporary messes without understanding the part that colonial ambitions and oppression played in misgoverning big blocks of the planet, including ones under the Star and Crescent.

But it’s a bit too glib of an escape valve to attribute too much to colonialism, as though religious or cultural traditions independent of that yoke weren’t playing a role.

An example Ahmed used from recent history was the United States’ support of the Taliban in Afghanistan as though there were some politically neutral beauty contest where out of the blue the United States picked favorites and grabbed the worst candidate.

In reality, we saw the USSR bogging down in the attempt to control the Afghan border, a long-standing Russian interest stretching back into the “Great Game” the Tsars played with the British in the 19th Century. More of that colonial, imperialist legacy, to be sure, given fresh a coat of CCCP red paint.

It would have been a novice geopolitical blockhead indeed not to have seen an opportunity to blunt the Soviet Union (the bunch staring down our atomic bombs with ones of their own, remember) in this window of opportunity.

The Reagan Administration ran with the “enemy of my enemy is my friend” logic and funneled support for whoever was most willing to shoot at Russian Hind helicopter gunships; the Taliban were among those on the weapons queue.

We didn’t think too closely (then at least) about how little some of those on the receiving end of the American military aid shared our Jeffersonian civic values. Such are the persistent ass-biting pitfalls of Realpolitik. Play at your own risk.

But reducing all this to a repetitive cartoon of “colonialism” oversimplified what was a complex tangle of competing motives and interests. The United States didn’t “support” the Taliban in the way it supported the National Endowment for the Arts, as some embodiment of desired goals. The Taliban were thugs of convenience. Dangerous ones, as it turned out.

Ahmed applied similar gloss to less modern history, such as his implying that any unpleasantries (particularly involving Jews) that may have gone on regarding Moorish Spain were but the impact of the Christian reconquest of the peninsula.

As it happened, I was the one in the audience who knew in what year the Jews were expelled from the unified Christian Spain, calling out “1492.”

I didn’t mention at the time (but could have) that most of those expelled Jews emigrated to Istanbul (old Constantinople), now capital of the Muslim Turkish Empire. As an aside, many of those Jews who remained in Europe included chess players who ironically spread the Spanish “Queen’s Chess” (with its overpowering female chess piece) around the continent.

But it would have been an historical evasion to think that the Jews faced persecution only from the Christian side of the border. As the reconquest hardened, so too did the attitudes of the Muslims, particularly the more fundamentalist Berbers who came across from Morocco to help defend the faith.

As a consequence, in the centuries leading up to the final 1492 expulsion, Jews tended to keep their bags packed, ready to jump to whatever side was less of a problem for them. Sometimes this was Moorish Spain, sometimes it was the Christian kingdoms.

I wish everyone could progress to an environment where people could dispassionately assess the history, learning from its positive and negative accomplishments, letting the chips fall where they may without feeling obliged to paint over or around the less pretty bits.

Maybe it’s a bit easier for atheists to do this because we aren’t defending a faith. It doesn’t matter to me as an historian to assign blame to the Other, or make sure the honor of a particular religion is not besmirched.

But inevitably in the moment people naturally circle the wagons, downplaying the awkward legacies, and indulging in simplifications to keep the image in the public mirror as close as possible to the picture they want to be true.

So we get fearful conflations of Muslims with Arabs with terrorism, which leads to prejudicial profiling and “random” airport searches that are suspiciously far from random.

Oh — and overly-myopic lectures on “colonialism” too.