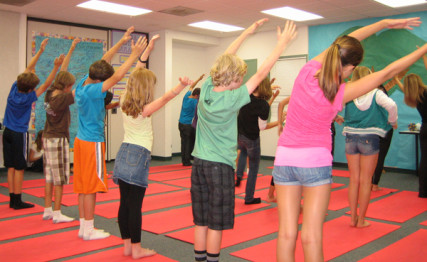 SAN DIEGO (RNS) In an elementary school classroom with an American flag draped over one wall, a couple dozen students rose to standing positions. Then they shifted into poses called “volcano part one,” “silent gorilla,” and “rag doll.”

Some students may not realize it, but the semiweekly, half-hour course might be gone by the time they return in the fall.

In this upscale, seaside suburb just north of San Diego, parents have filed a lawsuit arguing the Encinitas Union School District should do away with the yoga elective because the discipline is inherently religious, and the teaching of it in the public schools violates the First Amendment.

The trial resumes this week in San Diego Superior Court and a decision could come as early as Wednesday (June 26).

This “represents the clearest case I have observed of the government advancing, endorsing, or promoting religion,” said Dean Broyles, president of the National Center for Law and Policy, a nonprofit based in Escondido, Calif., dedicated to defending religious freedom, traditional marriage and the sanctity of life.

“In America we do not allow the government to pick religious winners and losers, especially when you have a captive audience of very young and impressionable children as we do in our public schools,” he said.

School district leaders say they have tried to accommodate the dozens of parents who are disturbed by the new schedule, ridding the yoga courses of any elements that could be construed as religious. Teachers, for example, do not instruct the children to chant or place their hands in prayer position.

Still, the court battle has divided the community. Some children have been teased for opting out of the elective and told by classmates that “they and their parents were ‘stupid’ for believing that the yoga program was religious,” according to the lawsuit.

Mary Eady has not to allowed her son, who attends one of the schools in the district, to take the elective because of her Christian beliefs.

“They are seeking to shape the way that the children view and interact with the world,” Eady said.

Parents against the program argue yoga should be an after-school option.

Timothy Baird, the district’s superintendent, said all students, whether or not they opt out of the program, receive the mandatory amount of physical education instruction.

But David A. Peck, a lawyer with Coast Law Group LLP, a firm based in Encinitas, said “the folks who are against the yoga program are conspiracy theorists.”

Peck represents families of more than 150 students who want the yoga program to stay. Together they’ve formed a nonprofit called “YES!” or Yoga for Encinitas Students.

“I think to say that if some group of people view it as religious then it’s necessarily religious to everybody is just myopic,” Peck said. “It’s shortsighted.”

Although experts point to a 1979 federal court case that grappled with the instruction of transcendental meditation in the public schools, no court has ruled on whether it is appropriate to teach yoga in public schools.

Yoga instruction, however, has been offered in schools throughout the country for years, with the help of organizations such as Yoga Ed., based in Los Angeles and dedicated to bringing the practice to youth. Since its launch in 1997, YogaEd. has certified nearly 1,000 teachers to teach yoga in public and private schools, as well as for groups like the Girl Scouts.

Trainer Brynne Caleda says the program ensures the yoga curriculum meets guidelines set by the National Association for Sport and Physical Education, a nonprofit organization that sets the standard for best practices in physical education.

The Encinitas yoga curriculum that runs in all nine of the district’s schools began with a $533,720 grant from the K.P. Jois Foundation, an organization launched in 2011 with a goal of helping children around the country attain better health through the discipline.

The foundation is named after Krishna Pattabhi Jois, a prominent instructor who popularized a form of classical Indian yoga known as Ashtanga, and who taught celebrities like Madonna and Sting. It was started by Sonia Jones, a yoga devotee, and her hedge-fund billionaire husband Paul Tudor Jones.

Paul Tudor Jones has supported the University of Virginia’s Contemplative Sciences Center, whose mission is to explore meditation and mindfulness. Together with the University of San Diego, they are conducting a study on the benefits of yoga for kids.

In Encinitas, approximately 5,000 elementary students participate in the study, periodically submitting information, such as their body weight. Schools in Queens, N.Y., and Houston are also planning to introduce yoga courses. And if the results of the study prove promising, foundation leaders hope other places will follow suit.

“What I’ve really seen teaching is it makes you sort of better and deeper into whatever it is that you love,” said Reich. “I had punk rock students in New York who were atheists who just became deeper into their punk rock music.”

Carrie Brown, principal at the school, said she is disappointed by the hostility that surrounds the lawsuit.

“I know there’s nothing subversive going on. It’s just fitness,” Brown said. “I’ll be really sad if our yoga program goes away because I think the kids like it. So I’m just kind of still waiting and holding my breath.”