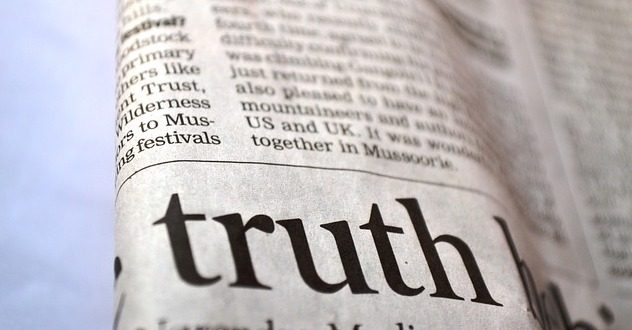 Is truth worth the trouble?

The New York Times’ email news summary recently reported that MIT researchers have found “false claims posted on Twitter were 70 percent more likely to be shared than the truth … And people appear to prefer false news.” They prefer lies to the truth, in other words.

Truth is more than perception. Truth is, well, truth. I have read various articles, including one or two on this website, that claim truth cannot be absolute. But if it isn’t then we are left to muddle around in a world where we can dismiss everything we disagree with as untrue – i.e., false news.

Discernment is the key that allows us to tell what is false and what is true. The trick is to filter out your biases before reading news stories and commentaries about an issue or topic or individual. Otherwise you risk being led by them down a blind alley that ends in ignorance.

Discernment is a word we must appreciate more deeply and use more often. Discernment reflects a desire to know truth more than mere facts, which can be distorted and manipulated. Discernment demands humility because the result of discerning is often that the truth we learn contradicts what we believe.

Discernment requires that we look below the surface, set aside judgment, be open to correction and then, when we have discovered the truth, provide it to others so that it raises the level of public discourse.

Discernment has been a part of the Christian vocabulary for a long time. But a lot of Christians appear never to have heard of the word. They are the Christians who most often buy into false claims and prefer them to the truth. They give a bad name to our faith because they use their so-called faith to justify ignorance.

Jesus, who described himself as “the way, the truth and the life,” would love it if we would ask him for the gift of discernment. But when we already think we know something, especially when we can tie our “knowledge” in some way to our faith, we rule out discernment as unnecessary and archaic. We rule out the voice of the Holy Spirit because, well, God forbid we should be wrong about something!

Previous Ask A Mormon: What happens to someone after they’re excommunicated?
Next Donors pledge $3 million to enhance campus ministry at Whitworth