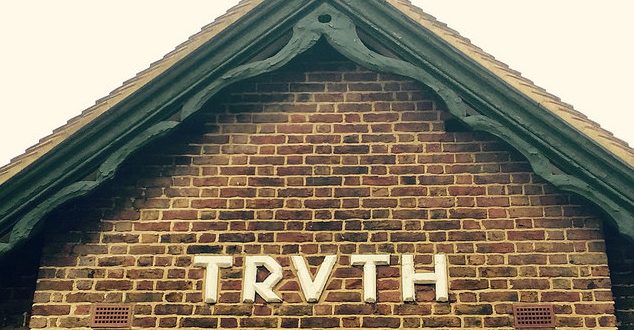 Is there a truth to truth?

Often we hear the word “truth” used as if it were an object, a substance, either existing separately on its own or as a characteristic of the object, a substance, like its color or temperature. Yet, in my opinion, it is not an object external to the minds and, ultimately, the language, of the speaker and listener, or a characteristic of such an object. I deny the truth of platonic ideal objects, or that everything in existence, every collection of similar objects, has a permanent ideal that is more real than the everyday object or collection of objects. For any one chair or a group of chairs to exist, this theory suggests that there must be an ideal chair that in-forms all chairs.  I am not a platonic dualist; there are not two cosmic substances.
Truth, for me and most other modern thinkers, is not an object existing separate from the minds of perceivers. It is a word denoting a metaphorical concept that suggests two things. The word acts as an intensifier, indicating that the thing to which it is attached is important to the speaker, and probably should be important to the listener. Also it suggests that the speaker believes there to be a correspondence between the concept to which it is applied, which is a mental artifact, and what is real, or really “out there”, that my notion that here is a chair corresponds in important ways to that object upon which I begin to sit. However, my brother enjoyed pulling it out from under me!
When we try to answer Pilate’s question, “What is truth?” that truth is not an end but a way. It is not an absolute, a perfect ideal to be accepted for all time, or a singular, one-time relationship therefore to be rejected because of its changeable singularity.  For the feminist theologian, Catherine Keller, professor of theology at Drew University, whom I recently heard at the Westar Institute’s annual spring gathering of  scholars,  truth is a process discussed in a relationship of minds and their various languages and is not to be regarded as an ‘absolute,’ forever existing, or as a situational ’dissolute,’ to be rejected when shown to be imperfect. It is rather a ‘discernment’ judged to be significantly actionable in this time and place to produce a betterment, or sustainability of the commonwealth of creation.
Thinking thusly, “truth” is never “truth” and is never certain nor, conversely, something completely relative only to the idea and metaphorical formulation of a solitary and isolated mind. It is a growing and living idea formulated in the perceiver’s relationships with other things and minds. It is not a foxy truthiness used only to manipulate those who might buy into one’s product, but a truthing, a continuing birthing of Wisdom’s concepts. It changes, growths, and dies.
This being the 500th year of Martin Luther, we can see how the situation he faced under the constant threat of assassination or capture and torture in the 16th century shaped his attitudes about the church’s relationship with individuals and the community of believers, of the poor and common folk. Would he be so confrontational and careful today, when facing a church that has as its leader Pope Francis? What was apparently true then would not be true if applied to today’s situation. But both would be true, and both would take true courage and integrity. Both may suggest differing concepts of salvation. Even our views of what faith is have changed, but both views are and have been true. God, one may say, displays a changing discernment.
Or again, while in Ashland I saw the Shakespeare Festival’s production of Luis Alfaro’s Mojada: A Medea in Los Angeles. It is a tragedy about a recently arrived family of immigrants fleeing the dangers and corruption of Mexico only to find a more deadly and corrupt culture in the U.S. In both people are no better than property, in one owned by men, in the other owned by whoever has the money and power to further her or his materialistic greed.  In the one, men are owners, in the second there is an equality where anyone with enough drive to overwhelm the lesser is the owner. These slightly different cultures come into conflict with the living and life-giving mother and her culture of La Familia as grounded in love. Spurned, she, the “wetback” mojada, precipitates a horrifying resolution. The audience left the theater in silence, and I climbed the hill to my car, only to cry: could God have created such a monstrosity, or is God simply and lovingly Emanuel, with us in our joint pain and powerlessness?  What is the truth?

Previous Still no sign of leader for White House faith partnership office
Next Video – Coffee Talk: The Nature of Truth