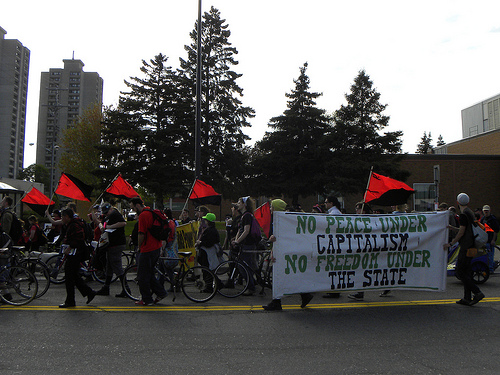 Socialism. I can almost see your eyes glazing over. Fight the urge. You may think the topic is unimportant; will it change the price of my next latté, you may ask?  Does it really matter what kind of government we have? Give me a moment and I will show you why the concept of socialism is profoundly important to you.

Depending on your worldview, socialism conjures up different ideas. For some it is the idea of a utopian society in which no need exists, satisfied through the communal effort of all. For others, it is a dangerous philosophy of governing society bent on handicapping the growth of the individual person. There are some people who do not have a clue what socialism means, and frankly, do not see the relevance of having a national discussion about it. In Christian circles, the ignorance and indifference about Socialism are staggering.

I am indebted to Ludwig von Mises’ seminal work for a concise definition of socialism. Although there are various forms of socialism, von Mises defines socialism in its simplest form as, “a policy which aims at constructing a society in which the means of production are socialized…” Integral to the definition are the catch phrases: economic and social justice, fairness, equality, full employment and redistribution of wealth.  Private property does not exist in the purest form of Socialism.

In contrast, capitalism is the means of production arising from private property. Let me try to explain briefly. If I owned a cow (private property), I could sell the milk, have the cow bred, or butcher the cow to sell the meat as I determine. I hold the right to decide the use of my cow, understanding that the profit derived is mine to utilize as I wish.  When the cow is collectively owned by the community or nation (socialism), the decision on how the cow is to be used is made by the recognized leader of the state, and the profits are distributed to the community as the leader determines. The decision is removed from the individual and placed into the hands of the State to decide as it wills.

Is private property a biblical teaching? Amidst the blazing fire and blaring trumpet at Mount Sinai God gave a witness to his divine character by inscribing on tables of stone Ten Commandments. Of the Ten Commandments two deal directly with private property and two loosely address the subject. The two commandments, that of stealing and coveting my neighbor’s house, wife, servants and cattle, cannot be legitimate prohibitions without the reality of private property. I cannot steal when everyone owns all property. To desire strongly my neighbor’s possessions is to state they first belong to my neighbor.

The socialist cites the early church as an example socialism. They assume the scenario that every believer sold his or her property and laid the money at the apostles’ feet.  Therefore all private property was liquidated and the revenue given to the leaders to distribute as they willed. It is also assumed that it was mandated by the leaders to coerce all believers to participate. But is that true?

Since Pentecost believers had skyrocketed, and many had remained in Jerusalem longer than planned. With their money quickly running out, the everyday practical needs of the new believers increased. Seeing the need, many of the believers out of a heart of generosity willingly sold their property and shared with those in need.

We know it was a voluntary action and not coerced by the leaders; Ananias and Sapphira are examples. They sold a piece of property and brought only a part of the proceeds to the apostles, but lied, stating that they gave the full sum of the proceeds.  Peter asked Ananias two important questions, “While it remained unsold, did it not remain your own? And after it was sold, was it not at your disposal?” In other words, we did not ask you to sell your property; you did it voluntarily, and the benefit from the profit was for you to determine.

The right of private property as guaranteed in the Constitution and taught in the Bible is progressively being attacked. Whether it is property, businesses or income, those preaching socialism want to confiscate private property in the name of fairness and distribute to all equally. The state has not officially established socialism in America.  Yet, by intrusive, liberty-choking actions the state burdens private property owners with regulations on what they can do with their property. In effect, the state determines what property owners can do with their property. That, in itself, is a form of socialism.

Previous Meet Amy C. Rice, our arts and entertainment writer
Next I am opposed to the death penalty, and have been for years