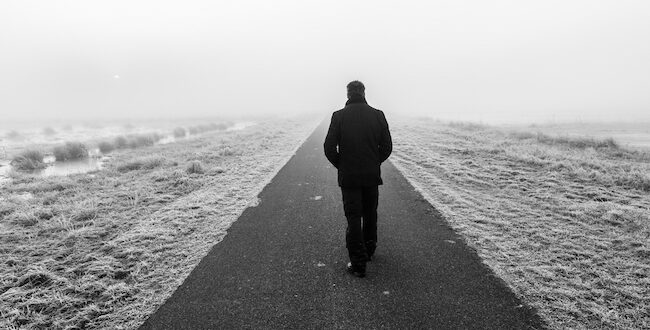 Man walking away on an empty desolate raod/DepositPhotos

Nobody you can be there for, or lean on. No one who will sit by, chat at, and listen to you. No one who might understand, or anyone to fight, get frustrated with, argue and get mad at.

And nobody to be a kerosene doll and detonate to try and destroy you.

Neglect is a state of starvation. People need life supporting attention to not only thrive, but survive. Lack of cohesion to others is detrimental to the health and well-being of any human.

But is it better to have been near starved to death, or been fed poison in the gruel?

Baby primates will cling to a ‘wire mother.’ Tom Hanks in “Castaway” forged a relationship with Wilson, and belongings are hoarded, guarded, stored, clung to and adored to the point of suffocation. People have to connect, and will substitute objects for flesh and blood if conditions for a healthy relationship are not available. We absolutely need to.

It is reciprocation that fuels and keeps lit the fire inside; the life behind the shine in the eyes. But is a total lack of light worse than the dark of having been near buried alive?

When we reach out we need to know our acts are felt, that our touch is warm, we matter, and there is weight in what we do. We need to be alive and inhabit space, nothing could be worse than feeling erased.

Not many have to travel far to be reminded of someone with deep emotional scars. There are those stricken who hardly find rest. Some feel a need to strike a match and burn back, with no concern for who stands in the path. No one can slash deeper than one with wounds from a careless, callous, and cold-blooded coach.

As harmful as cruelty is on anyone who has been forced to endure its heart-chilling effects, total neglect is worse still. A child raised by wolves is better than left in the dark alone.

But I stuck it out with a mind that it will be alright. Looked for the bright side while being fed crap in life. I put up with pain to keep from being alone, I suppose.

In the damage of ashes, slashes, splint bones and blood, in lakes of regret that can overwhelm and flood, are depths and sights not many can bring, in the song we all share add a chorus only I can sing.

To be in the story and play a hard role is better than an empty page with no sentence to show.

Jim, a Union Bricklayer by trade, was born in Spokane and has lived there the majority of his life and is associated with a few Christian churches in the area through weekly Bible studies, recovery meetings, opportunities to serve the vulnerable, and as a parishioner. He has a checkered past because of bad choices, but has since gained a foothold on a better way to be alive and seeks to share his 'experience, strength and hope with others. He has decided to make it his business what it is that is his business, and what it is that is best not to be. He is also proud to say he has an Environmental Science degree,(an A.S. in Water Resources), obtained from Spokane Community College, a father to six wonderful children and grandfather to five, and loves learning how it is to live right.

Previous The State of Christendom in American Contemporary Culture, Part 5
Next Churches That Use Cannabis as a Sacrament