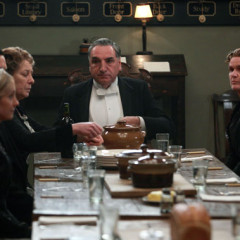 Is God the missing character in ‘Downton Abbey’?

The third season of the megahit PBS series “Downton Abbey” wraps up on Sunday (Feb. 17), capping another must-see run of ruin and redemption at Lord Grantham’s stately English manor. Yet some are still left puzzled over the absence of what should be a leading Upstairs player in this colorful cast: God.

Writing last month in the flagship evangelical magazine Christianity Today, Todd Dorman wondered why — despite the heart-rending melodrama and all the “divine trappings” that gild the 1920s scenery — “God is a peripheral presence at best.”

“There are numerous fascinating blog posts … that search for implicit Catholic and Christian themes in the show — good and evil, suffering for cause, various types and grades of love and devotion,” Dorman wrote. “At some point, though, especially with a vicar in the family’s employ, it seems odd for such connections to remain unnamed, unspoken, and, for all we can see, unperceived.”

The Rev. Ian Markham, president of (Episcopal) Virginia Theological Seminary and a big “Downton” fan, also discerns serious spiritual themes beneath the surface of the narrative. Yet as Markham told Religion & Ethics NewsWeekly, faith itself is “relatively invisible. But you would expect religion to be more present in their lives.”

It’s “a bizarre omission,” Telegraph columnist Robert Colvile wrote after the second season wound up. “Perhaps it’s this godlessness, rather than any malice on the part of writer Julian Fellowes, that explains why Downton’s residents appear to have such a peculiarly cursed existence?”

There are, to be sure, a few glimpses of spiritual pathos, as in Season Two when Lady Mary — eldest daughter of Lord Crawley, the Earl of Grantham — beseeches God to keep her beloved Matthew safe in the trenches of World War I. “Dear Lord, I don’t pretend to have much credit with you,” she says. “I’m not even sure that you’re there. But if you are, and if I’ve ever done anything good, I beg you to keep him safe.”

Still, that doesn’t really rise to the level of what American viewers, in particular, might consider an appropriate religious response to the circumstances. What about a dark night of the soul that leads to enlightenment and conversion? A personal relationship with Jesus, perhaps? Sharing that faith with others?

“They wouldn’t do that, good Lord, no,” said Michael Walsh, a British author and church historian who has been following the series. “And they certainly wouldn’t do it in public.”

As Walsh said, that’s just not the way the English — namely high-church Anglicans like the Crawleys – did religion then. (Or now, for that matter).  And if the Brits of the age were devout, he added, they “tended to turn to Catholicism.” In fact, English Catholicism at this time was enjoying something of a countercultural revival.

Catholic chaplains had distinguished themselves with their battlefield ministry during the Great War, and major writers like G.K. Chesterton, Graham Greene and Evelyn Waugh converted in the 1920s and ’30s along with a number of other well-known figures.

Waugh’s most famous novel, “Brideshead Revisited,” was set in this era and also focused on the travails of English aristocrats, though chiefly on their struggles with Catholicism and “the operation of grace,” as Waugh put it. That formula proved to have an enduring appeal when the 1981 BBC adaptation became a trans-Atlantic phenomenon that prefigured the success of “Downton Abbey.”

Indeed, doubt plays at least as big a role as belief, which reflects the real disillusionment of the post-war era, at least for some. The jailed valet and veteran John Bates seems to dismiss faith at one point, and Lady Sybil does as well, which is especially poignant given her fate.

“It became, in short, fashionable to lose faith,” said Callum Brown, a religion professor in Scotland who specializes in secularism in Great Britain.

But above all, “Downton Abbey” has been a melodrama about tradition and change and family, and that’s largely how religion fits in — not as faith per se, but as a marker of class and status, of social and personal boundaries that are all coming under pressure to adapt to modern ways.

In this context, religion is about doing what is right and proper — for king and country and the status quo — rather than divining what one personally believes. The rituals of the evening meal are on par with the rites of the Anglican religion (and maybe more scrupulously observed). When the endlessly quotable dowager countess, Lady Violet (Maggie Smith), counsels Matthew on choosing a wife, her concern is about appearances as much as the sanctity of the nuptial vows: “Marriage is a long business. There’s no getting out of it for our kind of people,” she says.

Doctrine and theology barely register, and when they do, it is usually through the filter of the anti-Catholicism that was a given in upper-class Anglicanism, and throughout England as the Irish independence struggle was in full swing.

“But isn’t there something rather un-English about the Roman Church?” the local vicar harrumphs as he baits Sybil’s Irish-Catholic husband at dinner. “I cannot feel bells and incense and all the rest of that pagan folderol is pleasing to God.”

In this third season, Lord Grantham himself, furious that his first grandchild will be baptized a Catholic (“There hasn’t been a Catholic Crawley since the Reformation!”), introduces American viewers to anti-Catholic epithets like “left-footers.”

“I don’t want the thumbscrews or the rack,” as he tells a visiting Anglican bishop, “but there always seems to be something of Johnny foreigner about the Catholics.”

This isn’t the sort of spiritual reckoning that some may want to see, but it does reflect the times — and even our times. Anglican leaders are currently lobbying against a bill that would lift the centuries-old ban on members of the royal family marrying Catholics, and the influx of Muslim immigrants is testing Britain’s culturally Christian identity.

On the other hand, for those looking for Fellowes to channel some of the spirit of Evelyn Waugh, a fourth season is in production. If the shockers of Season 3 and its grand finale Sunday night haven’t planted the seeds for a spiritual conversion — or crisis — in this cast,

Previous VIDEO: Ashes to Go
Next Helping others this Lenten season