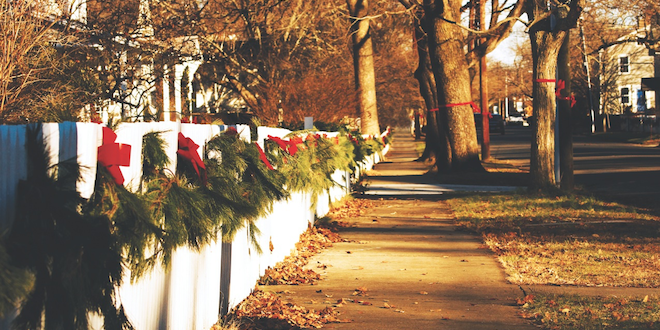 Is Christmas a time of love, joy, peace … or terror?

We Christians, at least in theory, have been preparing for Christmas for the past few weeks during what’s known as Advent, a word that means arrival or “a coming into being, place or view.”

What should we really be anticipating? The arrival of Jesus? Well, yes, in a way. Jesus, as an historical figure, came and went roughly 2,000 years ago. According to the same old sermons we hear at this time of year, however, he’s always coming into our hearts in a new way. But if we really believe that then we should be preparing ourselves for something bold, exciting, unusual and risky.

America’s Muslims are surrounded by the unavoidable external expressions of the joy, love and peace that Christmas inspires. I say “external” because they’re not reaping the benefits of those sentiments right now. Those old Christmas-y words ring hollow with them.

On Dec. 15 The New York Times published a story about how Muslim teens and 20-somethings are reacting to all the fear-mongering and mistrust in the wake of atrocities by ISIS and Boko Haram, then the Paris carnage, and now San Bernardino. The online summary of Kirk Semple’s story spells it out clearly: “Growing up amid the fight against terrorism, a generation is buffeted by prejudice and politics, and parents and counselors are growing concerned about the toll it is taking.”

And well they should. Imagine what would happen if everybody looked at you as if you were a terrorist. “You feel like the whole world is against you,” said one young Muslim woman in that story.

Jesus knows what it’s like to be an American Muslim. He was grossly misunderstood, painted as a heretic by those of the dominant religion, feared as someone whose words would trigger the terrifying wrath of the enemy, murdered as a scapegoat, laughed at when he was crucified, and abandoned even by his closest friends.

I wonder, now a bit frightened, whether some of the Muslims who are being demonized in this so-called Christian nation might soon begin to believe the lies, make the leap into identifying as terrorists, and then start acting like it. It would certainly prove the truth of Hosea 8:7. Having sown the wind, we shall reap the whirlwind.

Polls suggest that Americans are increasingly fearful about the dangers of being gunned down or blown up. But three years ago, after Adam Lanza murdered more than two dozen helpless children and adults at Sandy Hook School (including my friend’s daughter) we didn’t start worrying about every guy on the street because Lanza couldn’t be pigeon-holed into a specific group. He was just one solitary nutcase whose mental and emotional gears were stripped.

The bigoted loudmouths who vocally accost American Muslims are the real terrorists because they’re terrorizing Muslims and possibly planting the seeds of terrorism in others.

The solution is pretty simple. It’s called Christmas. We must enter into the adventure of Christmas by taking the bold, exciting, unusual, risky step of reassuring our Muslim friends that they are not alone, they are not strangers, that we do not reject them, and that we will defend them against those who treat them that way. We must do this if they are to have some experience of the love, joy and peace that Christmas represents.

And while we’re at it, let’s do the same for anyone of any religious, cultural, ethnic or economic background who’s suffering in the same way, including the poor, the homeless and the “stupid.”

Defending Muslims doesn’t mean accepting their beliefs. Jesus didn’t embrace pagan beliefs when he ministered to the Samaritan woman at the well, granted the request of the Samaritan woman begging for her child’s healing, or did the same for the Roman centurion seeking healing for his servant. He loved them and let that be his entire message.

Christmas isn’t usually portrayed as a time of stark choice but we face one in 2015. We can celebrate Christmas in the same old way, for what it means to us for a few weeks every year, and thus turn our backs on those who are in need, which will teach them that this is what the Christian faith is about. Or we can embrace Christmas as the glorious adventure God meant it to be every day – the daily arrival of Christ in the world. It’s only via the latter that Jesus truly comes into being, place or view and becomes real to us as well as to others.