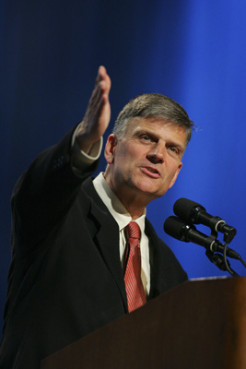 Over the last week, Americans learned that the Internal Revenue Service targeted some 500 conservative groups for extra scrutiny, some of which included the words “Tea Party” or “patriots” in their name.  Several reports say that the agency has also targeted some Christian organizations, going so far as to demand the content of members' prayers.

On Tuesday, Politico reported that Franklin Graham, president of the Billy Graham Evangelistic Association and Samaritan's Purse, said the IRS targeted both of his ministries as part of an Obama administration effort of “targeting and attempting to intimidate us.”

Graham said in a letter that an ad encouraging voters to support “candidates who base their decisions on biblical principles and support the nation of Israel” during the 2012 election was the reason IRS agents visited the North Carolina offices of both Graham groups. According to Politico, the ads in question supported a state constitutional amendment banning same-sex marriage. That amendment, Politico reported, passed in May.

On Friday, The Blaze reported that James Dobson, a Christian radio talk show host and author, said he was targeted by the agency for criticizing President Obama.

“It all started when he decided to create a 501(c)(4) for his radio ministry, Family Talk,” Billy Hallowell reported.

After six months of silence, the IRS reportedly “flooded” the ministry with questions they considered “odd.”

“There were all kinds of questions — ones we’ve never seen before,” said Dobson's son Ryan.

According to the younger Dobson, the IRS asked about their political views and copies of past broadcasts and transcripts.  In March of this year, Dobson learned that the agency was set to recommend they not receive their tax exempt status because of criticism of Obama.

“We inquired about our status and [the agent] said she was probably going to recommend that our application not be [granted],” Dobson told The Blaze. “She said we were political and we had criticized President Obama … and she said we did it when he was a candidate.”

Dobson said his father has been in radio for 36 years and has worked under IRS regulations regarding tax-exempt groups.

Nevertheless, the IRS stated that since Family Talk sounds like a conservative group that does not represent all points of view, it could not qualify as an educational group.

After Family Talk threatened to take the IRS to court, the application was approved.

Other Christian organizations have also found themselves in the agency's crosshairs.

On Friday, the Thomas More Society provided a 150-page analysis detailing what happened to three organizations that oppose abortion to the powerful House Ways and Means Committee.

Two of the organizations reported that the IRS demanded, among other things, the content of prayers said by their members.

“Their question, specifically asked from the IRS to the Coalition for Life of Iowa: ‘Please detail the content of the members of your organization’s prayers,’” he said.

“Would that be an inappropriate question to a 501 (c)(3) applicant?” Schock asked Miller. “The content of one’s prayers?”

“It pains me to say I can’t speak to that one either,” Miller said in response.

Miller said he couldn't comment on the specific case, but said it would “surprise him” if the question was asked.

The Iowa group was also asked about its opposition to Planned Parenthood, and an IRS representative from Cincinnati “unlawfully insisted that all board members sign a sworn declaration promising not to picket/protest Planned Parenthood” in the future, the Thomas More Society added.

The society also said that the IRS demanded that Christian Voices for Life of Fort Bend County, Texas, “explain its content, message, and prayers as if they were engaging in highly offensive or criminal behavior.”

The American Enterprise Institute’s Scott Gottlieb said that “an unnamed healthcare provider in California is suing the IRS and 15 unnamed agents, alleging that they improperly seized some 60 million medical records of 10 million Americans, including medical records of all California state judges on March 11, 2011.”

“Both the IRS scandal and Obamacare contain similar themes: government overreach, massive intrusions, and bureaucrats granted opportunities to abuse their power in arbitrary and harmful ways. The American people should not be subjected to either,” wrote Chris Jacobs, Senior Policy Analyst in the Center for Health Policy Studies at The Heritage Foundation.

Previous Humanists find ways to say ‘I do’ without God
Next POLL: Should the Boy Scouts lift its ban on gays?