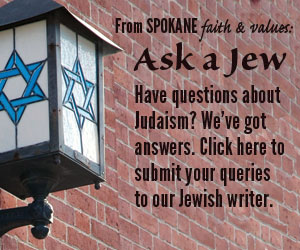 Sometimes being Jewish feels inherently controversial. Hence the old saying: “Ask two Jews, get three opinions.” Hence the wide spectrum of thought surrounding Israel-Palestine among Jews the world over. Even the name of this feature, “Ask a Jew,” could incite debate. Is the term “Jew” offensive, bringing to mind anti-Semitic slurs past and present? I wrote about that question back in 2012; my findings, not surprisingly, were inconclusive.

Like any faith tradition, Judaism is far from monolithic, and I can’t possibly represent such a varied diaspora. But I bring to “Ask a Jew” what I hope is a useful mix of typicality (bris, bar mitzvah, college Hillel experience, synagogue membership) and idiosyncrasy (I love Christmas, I want to raise my kids interfaith, and I listen to Moody Radio).

Identifying as Jewish in Spokane can be strange. At times it feels like Christianity, which I think many Jews are taught to fear, is in the very air we Spokanites breathe. Fortunately, I have as much to learn from my Christian (and Muslim, and Buddhist, and Mormon) friends as they do from me. And I don’t have to sacrifice my Jewishness to be in relationship with them. If you’re reading this, you already know that SpokaneFAVS fosters interfaith dialogues that might not otherwise exist. I’m proud to be part of this community, and I look forward to learning along with you as I try my best to answer your questions.

Previous Quote 050714
Next Atheist TV: Coming soon to a television near you