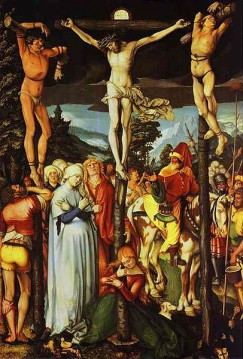 Interpreting the crucifixion, and looking at justice

We Americans have come to hold an incredibly unhealthy view of justice.

Why has it gotten so bad, and what does the Christian faith have to say about justice?

If we look to our faith to explain the way we see justice acted out in everyday life, there are a couple of models we can operate from. Ultimately, our interpretation of the crucifixion is vital to our understanding of these models.

One interpretation of the crucifixion is that Christ died for us because of our brokenness. We had been so sinful that he came to fix our mistakes for us so that we might have the opportunity to be in relationship with God. In this model, when Christ dies, he is taking on all of the suffering, and we are left feeling a hefty amount of guilt.

We are told that when Christ was punished for us, we were relieved of the burden of our sins.

This sets up a standard of retributive justice in our lives. There had to be a punishment in order for God to forgive our sins.

Derek Flood, author of Healing the Gospel, offers a different understanding of the crucifixion. He lifts up the idea of “interchange in Christ.” Instead of seeing Christ’s death as a substitution for our punishment, this model views Christ’s death as an act of participation in the human condition.

The term “interchange in Christ” refers to the way his death transformed our condition as followers of him. In 2 Corinthians 5:21, Paul writes that Christ became sin. What could be the purpose of Christ becoming sin itself?

Flood argues, “As Paul states, its purpose is so that ‘we might become the righteousness of God.’ In other words, it is restorative not retributive. Christ was made sin itself, so we might be made righteousness itself.”

This model offers Christ as a pathway to healing. His death was a form of restorative justice for all humans. God was not punishing us through his death, but was granting us a way to find wholeness in a broken world.

A punitive justice system, like the one we see in modern America, functions on the basis of a retributive model. A human makes a mistake, and we lock him or her up as punishment. This is easily justifiable if Christians supporting retributive justice see the crucifixion in the first light.

However, I believe that we would have much lower incarceration rates and higher rehabilitation rates if Christian worked to promote the second model of restorative justice. When we believe that God loved us enough to heal us through the death of his son, we are empowered with a message of hope.

No longer is it enough to simply punish a person for their misbehavior, but as Christ did for us, we should work to restore that person to a positive place.

A restorative model of justice would see us placing convicts in rehabilitation programs that would benefit the individual and society at large.

I hope that this vision is not unrealistic, and that one day our prisons will house less than our fair share of prisoners.

“Social Justice in Modern Christian Thought” is a Religious Studies course at Westminster College. In our work together we seek to interpret the work of Christian ethicists and theologians in light of contemporary cultural and political events. The course is taught by the Rev. Jamie Haskins, the campus chaplain.

Previous 033114 quote
Next April Fool’s isn’t a religious holiday, but there are some religious roots