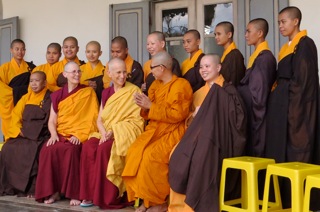 Why would a Western woman leave her family, shave her head, and don the plain robes and simple lifestyle of a Buddhist nun? And what impact does her choice have on society?

The Alliance for Bhikkhunis, Sravasti Abbey, and the Unitarian Universalist Church of Spokane will explore these questions when they join forces to celebrate Buddhist nuns and women in Spiritual leadership on International Bhikkhuni Day with a workshop on Sept. 29  from 9 a.m to 1 p.m at the Unitarian church. In conjunction with the event, there will be a showing of the documentary film “Blessings: the Tsoknyi Nangchen Nuns of Tibet,” which will be shown Sept. 28 at 7 p.m., also at the Unitarian church, 4340 West Fort Wright Blvd.

“Bhikkuni” is the Pali name for a fully ordained Buddhist nun. International Bhikkhuni Day is a global, grassroots effort, sponsored by the Alliance for Bhikkhunis, that is devoted to honoring the Buddhist Nuns’ Order, begun more than 2500 years ago, according to a news release. Currently, Buddhist nuns serve throughout Asia and, increasingly, in the West.

“Meeting with nuns last year for the 1st Annual International Bhikkhuni Day felt like one of those precious, eye-opening, heart-opening, shifts in awareness,” said local author Sarah Conover in a news release, lead organizer for Spokane’s Bhikkhuni Day celebration. “Until this day, I had no real sense of the commitment and sacrifice required of monastics. The experience cemented my own path in the Buddha’s teachings, and I want to share that with other women in Spokane.”

The Spokane area supports one of the few communities of fully ordained Buddhist nuns in America. Sravasti Abbey, outside of Newport, is a Buddhist monastery in the Tibetan tradition established for Western students who wish to pursue a monastic lifestyle. The community has six fully ordained nuns, including its abbess Thubten Chodron, who has practiced Buddhism for more than 35 years. A student of His Holiness the Dalai Lama and other Tibetan masters, she teaches Buddhist philosophy and meditation worldwide and has published numerous books on Buddhism, according to a news release.

The Spokane Bhikkuni Day celebration includes a half-day workshop to explore the universality of compassion and the roles of women — lay and monastic — in spiritual leadership. The morning will include meditations, dialogue with Buddhist nuns from Sravasti Abbey, a talk by the Abbey’s founder Venerable Chodron, and small group reflections and interaction. Spokane meditation teacher Dori Langevin will lead meditation as a part of the International Bhikkuni Day program.

Men and women of all traditions are invited to take part in the International Bhikkuni Day activities. There is no admission charge for either event, though donations will be accepted. Refreshments will be offered during the Saturday workshop, and local Buddhist groups are invited to share information about their practice groups and activities.