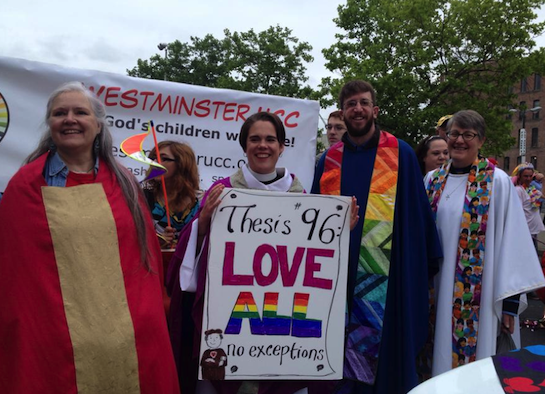 Jan Shannon, Assistant Pastor of Westminster United Church of Christ, said she had been “dreaming about it [the service]” for three years.

“Because so many gay people and other queer people have been chased out of their house of faith,” Shannon said, “I wanted to create a space where they could do that, feel safe and, you know, worship God without fear, so if we made it a pride interfaith service then everybody would be welcomed.”

Michael Jepson, board of directors of OutSpokane, said “questioning people of faith, and people who just want to celebrate the love of pride and want to do it in a celebratory, worshipful manner” are expected to attend the service.

Rev. Joseph “Joe” Niemiec, of Center of Spiritual Living, said this service is to let members of the LGBTQ community know there are spiritual leaders willing to open their doors to them.

“From my point-of-view, because I’m not part of the gay community,” said Niemiec, “it’s to let them [LGBTQ members] know that there are spiritual leaders, clergy in town, whose doors are open to allow them come in and be part of a community, a spiritual community.” He added that non-LGBTQ people are also invited to attend the service, and that he wants heterosexuals to know “they’re not a separate community, but that there is only one community of humanity.”

Jepson said the service is also about being “open and affirming” where the LGBTQ community can go to churches that “don’t just say, ‘We welcome everyone’ they say, ‘We love you.’”

Shannon added that the term “welcoming” is problematic in her view, citing a conversation she had on Facebook with an individual looking for an “affirming church.”

“Somebody was looking for an affirming church and lots of people gave them recommendations of churches that say they’re welcoming,” Shannon said. “But there’s a difference, and there’s lots of churches in Spokane that say, ‘Oh we welcome everybody,’ and you’re welcome to go in there and then they’ll tell you, ‘You’re a sinner and you’re going to Hell.’”

Jepson said the love the sinner; hate the sin attitude is not a warm, embracing spiritual tradition. “As an atheist, this is really important to me because you are opening your hearts to people who are hurt and damaged,” Jepson said. “And so many queer youth are so blistered by church and to have these people [clergy participating at the service] say, ‘I’m here, I’m from a real church and God loves you,’ that is so powerful and I’ve seen it move so many people.”

Shannon said the only pushback they have faced in preparation for the service came from a comment on Facebook.

“We’ve had at least one negative comment on the event on Facebook where somebody has said ‘Are these really churches?’ or ‘How would pastors want to be involved in this?’ or something like that,” Shannon said. “We just say nice things back to them and they go away,” she added.

Shannon said they reached out to the Hindu community and Muslim community state-wide, but were told that they are unable to come the day of the service. Juli Stratton, co-founder of North Idaho Pride Alliance, is expected to attend the service. Ben Stuckart, Spokane city council president and a candidate for the U.S. House of Representatives from the 5th Congressional District in Eastern Washington has expressed interest in attending the service, according to Shannon and Jepson.