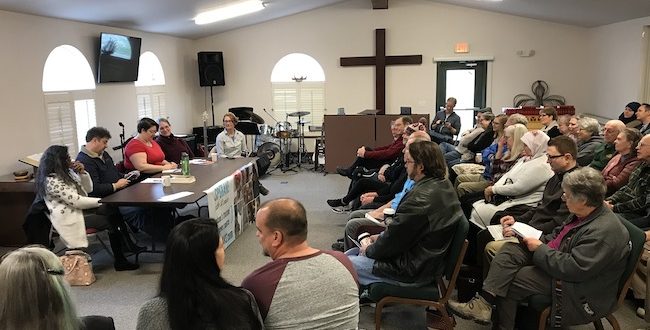 On Feb. 2 I attended the packed Coffee Talk regarding the future of the Interfaith movement.  There was a mix of young and old, male and female, with more than enough category shredding exemplars of people who were not what you might have supposed they would be based only on their superficial appearance.

Not among us though were representatives of some of the haughtier conservative Christian denominations around Spokane, for whom gender fluidity or ethnic diversity was disallowed on principle, and matters of faith might seem more a matter of received privilege than earned places in the heart.

Such people might not realize what was so apparent to me, the non-believer amongst the faithful, how everyone in the room came from a minority faith.  And that didn’t depend on which faith they believed in.  That’s always been true.  No matter what religion you believe in, most people on earth don’t believe in that one, and never have.  Everyone’s a minority, but may not realize it when in their local neighborhood theirs is the majority way of life.  Mustn’t it always have been so?  Well, no.

It may be one of the highest callings of the interfaith experience to change that perception.  To show that respect for others’ beliefs doesn’t mean the weakening of one’s own, but recognizing the dignity and conviction of others who are as certain of their certainties as you may be of yours, and being OK with that.

As for those who are not OK with that, the sort who wouldn’t attend even when invited, it is another feature of interfaith to recognize that it is not up to people to command the beliefs for others.  Still less for governments to take on that mandate.  To grant regimes such power inevitably corrupts both the politics and the religion, as the Founders of our Republic so well knew (even if some of its current elected servants blindly deny that central historical lesson, in their roughshod gallop to Make America Great Again—or at least, the “America” lurking behind their physical Walls and even stouter mental barricades).

We are reminded of the plight of children put in cages.  Of a climate in convulsion due to the acts of human agents, heedless of the science the smiling confident fossil fuel lobbyists are quick to dismiss when quizzed on congenial media.  Maybe too of public servants too easy to dismiss critics as mere “Fake News” even as they spread an icky goo of falsehood and civic corruption.  It’s Mueller Time.

These are perilous times, as worrisome to this secularist as the 1920s (and we should all recall how poorly that turned out), but here in this hall in 2019 with the good cheer and optimism of interfaith, we can see the seeds of a future that can show by action and thought that there is a better way.  That there has always been a better way, built on the knowledge of history and the dignity of the individual, and now further strengthened by the lessons of science and openly argued reason.

As for our human technology, early on at the meeting, someone had miscalculated on the feedback from the microphone, sending a loud and child-freaking acoustic boom through the hall, which would make anyone woke.  Afterward I chatted a bit with a young parent and his dinosaur-loving son, who had weathered the reverb blast because the lad had been occupied playing a video game.  That sort of thing goes on these days.  Live with it.

That child will be living in a world we may not even be able to imagine, full of exciting promise and discovery, and hopefully few terrors.  But it’s still the one we here now are making for him, step by step, law by law, action by action, or inaction by inaction.  It’s all up to us.  It’s always been up to us.  And it’s our responsibility as thoughtful stewards to pass on a planet in one environmental piece, and (as much as possible) in actual peace.

Even one weeping child, separated from its mother or under fear of poverty or starvation or tyranny, is one too many.  And there are way more than one to bring to safety and calm harbor

There is the interfaith to strive for.  And try for fewer feedback booms.