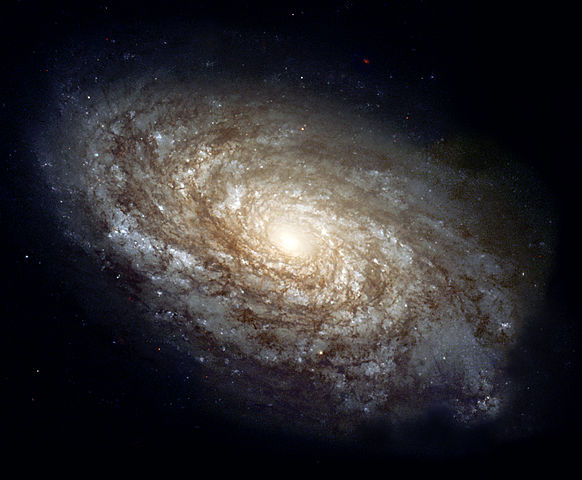 the majestic spiral galaxy NGC 4414 was imaged by the Hubble Space Telescope as part of the HST Key Project on the Extragalactic Distance Scale. /NASA Headquarters - Greatest Images of NASA

If Harvard University astronomer Avi Loeb is correct I will be overjoyed.

In 2017 scientists discovered the presence of what, to them, looks like a pancake-thin, one-millimeter-wide rock – from another solar system – that flew past our sun at extraordinary speed.

Those scientists haven’t explained why it’s moving so fast but Loeb suggests it’s because the rock is actually a piece of technology debris. Yes, that’s right, a sign of intelligent life far, far away.

And that’s what I’d be overjoyed about – the possibility that intelligent life actually exists somewhere in our galaxy, if not beyond.

Please forgive my cynicism, but the political nightmare in Virginia, on top of the comedy of both President Trump’s State of the Union address and the Democratic face-making and snickers in response, are just the latest examples of dangerously self-absorbed behavior by public officials that make me ask whether intelligent life exists here at all.

Why am I making a big deal out of this? Because values and ethics, which are the focus of this website and the core of good government, are based on intelligent, rational definitions, understanding and implementation. And yet values and ethics seem to have been excised from public discourse lately, which leaves everyone – on the left and right – free to shoot his or her mouth off, which merely adds to the mayhem and divides us even more, which, in turn, allows everyone to blame the other guy or the other side for splitting us up.

As David Brooks and Mark Shields noted during their Feb. 8 PBS News Hour segment, members of Congress are now more interested in using their committee hearings to put on a show rather than to conduct genuine investigations that lead to the revelation of truth and inform their legislative decisions.

It’s all about the show, baby. It’s all about performance, but not the kind of performance Congress once bragged about – writing legislation that solved our problems and delivered on politicians’ promises.

And to prove how completely lacking in intelligence they are, these same politicians will be coming to us in less than two years and asking us to re-elect them.

My advice for those scientists, if they really want to examine something interesting, is to forget about interstellar rocks and spend time studying the valueless, unethical rocks in politicians’ heads.