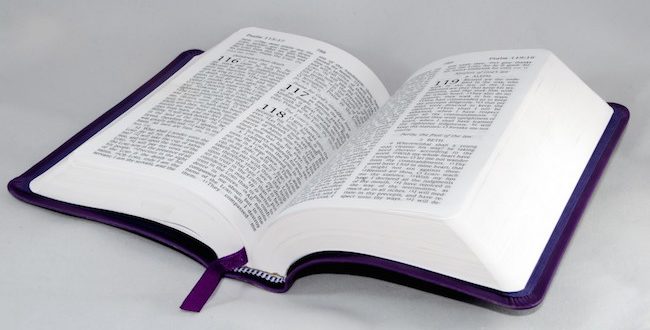 Public Domain Image of the Bible

Jesus answered, “My kingdom is not from this world. If my kingdom were from this world, my followers would be fighting to keep me from being handed over to the Jews. But as it is, my kingdom is not from here.” Pilate asked him, “So you are a king?” Jesus answered, “You say that I am a king. For this I was born, and for this I came into the world, to testify to the truth. Everyone who belongs to the truth listens to my voice.” Pilate asked him, “What is truth?”  (John 18:36-38 NRSV)

As an evangelical, my salvation was precarious. If I found one mistake in the Bible I couldn’t defend, I would lose everything.

I didn’t see it that way at first. I just wanted to keep the salvation I thought I had found when I became a Christian. But these thoughts threatened that salvation:

So I became a defender of biblical inerrancy, the belief that the Bible is completely true. By true, I mean accurate, a word carrying connotations of history, science, factual and physical observation, and impartiality. In my mind back then, there might’ve been a little room for poetic language, but I saw myth, fairy tale and realistic fiction labels as excuses not to take the Bible seriously and, therefore, out of the question.

How I handled inerrancy

Here are some examples of how I defended inerrancy:

In all of these situations, I shoved down a smart, skeptical voice inside me saying, “Wow, that seems unrealistic.” But I had to find ways to rationalize these problem passages if I wanted to keep my ticket to heaven. I didn’t notice the damage I was doing to myself by telling that skeptical voice it didn’t belong.

What I really wanted from inerrancy was security. I needed to know what was right and what was true. Because otherwise, how would I know the rules for going to heaven? Always in the back of my mind, that unconscious question was so freaking scary that I was more than prepared to jump through the mental hoops of believing that Judas set up a noose, jumped into that noose, broke the rope, fell to the ground and burst open in his middle.

But instead of finding security, I only found more fear. My certainty of salvation was balanced on a precipice, and all it would take to fall over the edge was finding one tiny inaccurate detail that couldn’t be rationalized away.

There was no definitive moment when I decided to let go of inerrancy. The part of me hungry for security was continually not satisfied. I became more and more anxious and got overwhelmed.

Over time, I realized I was looking for the Bible to conquer my fear of abandonment. To my deep disappointment, I began to think the Bible wasn’t offering an inerrant plan to escape loneliness. For a more detailed account of that journey, see Dear exhausted Evangelical: I was terrified of hell.

When I accepted I would have to look elsewhere for security, I began to entertain the idea of parts of the Bible being fictional. I thought this might be the gateway to dismissing the Bible altogether, but it felt so good to finally listen to myself. After shoving down my smart, skeptical voice for so long, I finally gave it permission to speak.

Once it had space, that same voice began to ask, “If it’s not about accuracy, what is it about?” And that’s when I ended up really listening to what the stories were trying to tell me. The questioning voice I thought would bring me despair ended up bringing me more genuine faith.

When I listened to myself, I felt like a whole person. I didn’t have to shove down parts of myself anymore.

Leaving behind inerrancy didn’t make the Bible less valuable to me; it shifted my emphasis from finding evidence of God’s reality to finding out how to love. Reading the Bible became an emotional, empathetic experience instead of an intellectual, factual one.

I used to read Jesus’ statement to Pilate about “testifying to the truth” as though Jesus was born for the purpose of telling people to believe in the physical events of his life so they could go to heaven.

Now I think I’d ask the same question as Pilate: “What is truth?” Four chapters before Pilate’s question, Jesus himself says, “I am the way, and the truth, and the life” (John 14:6 NRSV).

I am the truth, he says. A person. A person defined by his relationships with outcasts, sinners, widows, orphans, foreigners, strangers and other vulnerable populations – not only by facts.

I now believe the Bible offers a truth not from this world – not just a matter of physical events the way I used to assume. I think the writers of the various books unapologetically use all kinds of genres – history, myth, realistic fiction, fantasy – to explore truth, relational truth, truth too complicated to fit into facts alone.

Previous A Burning Heart Is Ours for the Asking
Next Spokane churches ask: Where are the youth?