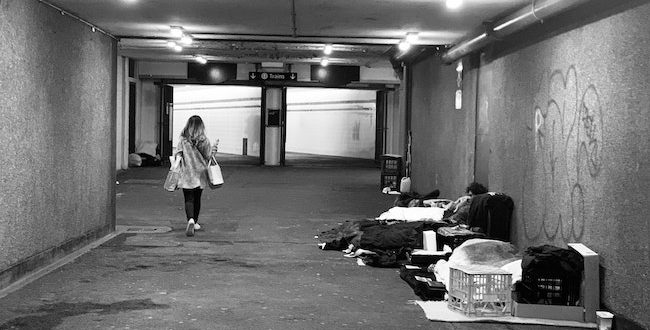 In keeping with the imbalance of all of these inequities, this is perhaps the most profound:

When you stop to think about it, this one isn’t even a logical assumption. If someone were to have seen me flying a sign in 2016, they would have seen somebody who had lived inside for the first 51 years of his life, and was largely outside for the next twelve. Naturally, I knew what it was like to live both inside and out.  But the person approaching me, having always lived indoors, lacked a good half of that knowledge base.

How the outsider is perceived

This led to a serious cognitive dissonance in how the outsider was to be perceived. On the one hand, they were in an ostensibly superior position; that is, a position from which one might feel qualified to render assistance. On the other hand, they were in what was actually a foreign position. No matter how much better one’s lot in life may seem, if the variables of that life were utterly foreign, then how can one presume to be of help?

“How could they possibly be telling us anything we don’t already know?” we would query amongst ourselves. “Or worse, how can they advise us on matters we do know something about, that they don’t?”

“They should be listening to us!” we eventually concluded. It was such an inescapable conclusion that we marveled at those who would persist in its denial.

But persist they did. People would relentlessly assault us with bits and pieces of perfectly impertinent, irrelevant information. They would tell us where the feeds and services were, as if we did not already know. They would present us with fliers that any one of us could receive daily at the doors to any of those events. Even when I was busking, even with my own guitar, they would tell me what I should have been doing instead.

Granted, not all passersby were of this predilection. But the saturation was severe enough that those who were not really stood out. How great it felt when my friend Neil and I were busking, and someone simply put a $5 bill into the jar and shouted: “You guys sound great, keep it up!” At least our street craft was acknowledged for what it was meant to be — not for something else.

Given that the disparity in perception was so huge between those who observed us, and we who were being observed, how best could our own aggregate head-space be described?

While attitudes varied from one outdoor dweller to another, there was naturally a thread of common interest in the details of outdoor living that, for some reason, most of those who approached us from inside were not interested in.

For one thing, talk of self-protection was very common. We all felt vulnerable — so much so that talk of vulnerability as it was experienced in the relative safety of indoor seclusion often seemed empty and meaningless. We were concerned with getting through the next night, with not being found by assailants in our sleep, with having the semblance of a visible weapon for self-defense, with having those nearby who could watch out for us.

In trying to get on in the wilds, I felt drawn toward guides from the past, bodies of knowledge I never thought I would ever revisit. The Boy Scout Handbook was one such book of knowledge.  Even knowing the right kinds of knots to use to secure my tent was a great bit of useful information, not to mention all kinds of things long forgotten: carving paths, leaving landmarks,  telling which way was North, starting campfires, and making them last.

I found myself also referring to more mystical works that had influenced my youth. “The Castaneda Series”came to mind. Principles from “The Yaqui Way of Knowledge” that clearly pertained to outdoor living surfaced in my psyche.  There was the principle of finding my place–or “spot”–wherever I decided to stay and sit, and thus maximizing my energy there. There was also the principle of disrupting the routines of life. These are skills that, while they seemed inapplicable to the workaday mainstream, were very useful in the new life that where I had found myself.

It was not uncommon for us to marvel in how separate this new existence seemed from the world to which we’d been accustomed all our lives. Indeed, those who still inhabited the previous mode of existence appeared to be strangers, and alien to us, even though they had once been our kith and kin.

The perception that even friends and family should in this fashion seem suddenly alien, combined with that of an unusually strong bond we who were outside together all shared one with another, further served to illuminate just how much we all looked to be outsiders. Indeed, we were but “strangers and pilgrims on the Earth,” similar to the identification of the sojourners among our progenitors, those who in Hebrews 11:13 lived by faith.

As a believer, I found myself taking to certain Scriptures that, while they had always seemed true to me in a way that transcended the tedium of regular workaday life, now they took on even stronger, more glaring meaning.

I heard people talk about how the people who were still inside were unaware of how there was no hope in the “mainstream” — that meaning the vast social entity from which we felt we had been expelled and flung full-force into this new realm of being. We knew there was no hope in the mainstream, and we were thankful for having been released from it. In my case, I likened it to the “world” as used in the Scripture, Romans 12:2: “Do not be conformed to this world, but be transformed by the renewing of your mind.”

When I was still in the mainstream, struggling to fit in and to function, I was unable to see how it failed to form a foundation from which a healthy spiritual life might spring. It was more accurately the case that it rather replicated the world system to which we are not to be conformed. And now that I was outside, I saw this clearly.

Not only this, but the Lord himself positioned himself as an outsider, much the same as we living outside now experienced ourselves to be.

“So Jesus also suffered outside the gate in order to sanctify the people through his own blood. Therefore let us go to him outside the camp and bear the reproach he endured. For here we have no lasting city, but we seek the city that is to come.” — Hebrews 13:12-14

“Have this mind among yourselves, which is yours in Christ Jesus,who, though he was in the form of God, did not count equality with God a thing to be grasped,but emptied himself, by taking the form of a servant,being born in the likeness of men.” — Philippians 2:5-7

Here was the sense in which our New Testament identification in Christ was made so much more accessible through the nature of the situation in which we all found ourselves, and its being opposed to the world.

“And Jesus said to him, ‘The foxes have holes, and the birds of the air nests; but the Son of Man has nowhere He might lay the head.’” — Luke 9:58

This became our experience.  It wasn’t just His being a model or example.  It was we ourselves living out His life in that manner through ourselves and our present-day experience.  We felt it night after night, day after day.

“For we brought nothing into the world, sowe cannot carry anything out of it. But if we have food and clothing, we will be content with these.” — 1 Timothy 6:7-8

It was interesting also in reading these time-honored words anew, how the author does not refer to “food and shelter.” We are to be content with “food and clothing.” Many people lived nomadically in those days, without shelter. Shelter is not a necessity in the sense that food is. This is one of the first things we learned, that we all came to accept, in order to cope with the radically different details of life outside.

“For we know that if the tent that is our earthly home is destroyed, we have a building from God, a house not made with hands, eternal in the heavens.”  — 2 Corinthians 5:1

While earlier in life I could see in this Scripture a note of hope, I now was able to embrace it as a living reality. For these indoor dwellings with which we used to be content were not our true homes. Rather, our true home is in the indescribable realm of the heavens, of which we, being freed from our indoor dwelling places, were now granted an ephemeral glimpse.

So, with all this naturally going on in one’s mind, as one continues to face the wildly unpredictable vicissitudes of life outside, do you see how much of the narrative we were made privy to, on the part of whoever had always lived inside, seemed frivolous and trivial in comparison? So complete was our absorption in this new kind of life, it came to baffle us that others, ensnared in physical boxes much like those we had already shed, still thought them to be containers of life.

For us, they were not, and really never could be, quite again.  For it was so often thought that those who lived therein had something to teach us about life.  It was rarely if ever thought that for those of us who lived outside, our lives had just begun.

Read parts one, two , three and four of this series