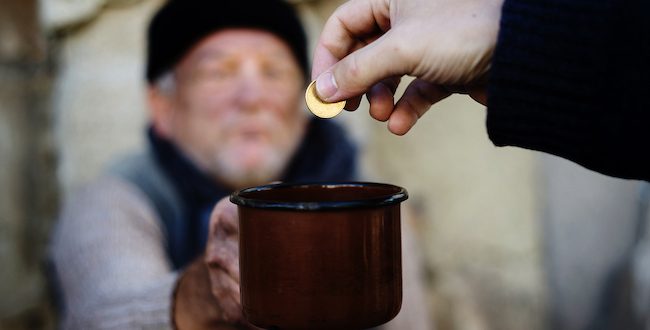 A homeless man asks for money/DepositPhoto

Read parts one and two  and three of this series

It was when Nadine Woodward was running for mayor of Spokane that I first heard Tracy Simmons speak. When I heard Ms. Woodward’s campaign slogan, “a hand up, not a hand out,” I felt compelled to comment. A handout to the homeless, she claimed, has a way of “enabling them.”

“It does enable them,” I blurted out.

Suddenly, I felt as though everybody in the room was looking at me.

“I was homeless for years in the San Francisco Bay Area,” I explained. “All that a constant string of handouts did for me was to keep me homeless.”

Now perhaps that sentiment is misleading. We all need to eat. Jesus fed the hungry without qualification. Does anyone say, “All Jesus did was give them a hand-out?”  That’s usually not the way it’s framed.

On the other hand, for five years I watched as a plethora of self-care items was freely distributed to whoever figured out where to find them. There were socks on Mondays, a laundry room on Tuesdays, and razors on Wednesdays.  There were 35 free meals a week in the city where I slept outdoors. Many people took continual advantage of these services.

In fact, it began to look as though the same people were showing up for all these events, year after year. There was a noticeable tribe in the making, whose members were a mixed bag.

First, there were those who were disabled, who showed up with caregivers — those for whom the community meal was a part of their planned itinerary. A second group was of a criminal bent, in and out of jail, and discussing their adventures openly. Still others had merely fallen upon hard times. But by and large, the bulk of those who frequented homeless services were clearly sane, competent, and able to work.

So why did they remain there?

For one thing, it isn’t easy for a person who lives outdoors to find a job. Homeless people are disadvantaged. I recall how one of my applications was rejected because I didn’t own a cell phone. Another time, I couldn’t afford the fingerprint check. There was a $35 fee, and I wasn’t able to come up with the money fast enough. It isn’t easy for a homeless person to impress a prospective employer.

Numerous obstacles stand in the way of a homeless person arriving at an interview. They may not be able to shower in time, or obtain decent clothing.They may not be able to manage the public transit to get them there. Even if they succeed at showing up on time and looking sharp, the interviewer may notice that they lost a job three years ago, and haven’t landed one since.

Their credit score may not be pristine. Worse yet, their mailing address may only be a Post Office Box. Why are they not providing their home address? Could they possibly be homeless? How can a homeless person be trusted with a responsible position? Aren’t they all lazy, and perennially unemployed?

“On to the next applicant,” the interviewer frowns.

Ironically, the fallacy that all homeless people are lazy is often what prevents them from being hired.  This leads to the next inequity that I have wanted to discuss:

It was often thought that because we were homeless, our lives were consigned to a countless string of handouts. It was seldom considered that our lives might be changed through a single hand-up instead.

Here’s How a “Hand Up” Works

Consider my own experience. Over a period of 12 years, how much money do you think went into feeding me and occasionally providing me with temporary lodging? Easily, thousands upon thousands of dollars, subsidized by the taxpayers of America.

How much money went into ending twelve years of homelessness in the Bay Area?

Seriously! That’s all it took. Once I was finally ready to get inside, I found someone who believed in me enough to front me $200 for a one way ticket to a brand new life. Shortly later, that person spotted me $200 for a deposit on my first place of residence. Granted, the place was an old, run-down hotel whose rooms had been converted to “apartments.” But it was still a roof over my head–with a decent mailing address, to boot.

On July 27, 2016, I arrived in the State of Idaho. On Sept. 1, I signed a one-year-lease. On Sept. 6, I interviewed for a church job. Shortly later, I was hired.This was after years of being considered “unemployable” in California — only because I lived outdoors.

Over the next few weeks, I received four $50 loans from my benefactor. The money went to necessities such as clothing, toiletries, and a photo ID. He and I stayed in touch for a while, and then, by and by, parted ways.

Would it be too much to ask the privileged people of America to walk up and down the sidewalks, talk to the people who sit there daily, get to know them, and decide for themselves who would benefit from a $600 hand-up?

To be sure, many would decline. And even those who accepted would face a rather daunting task. It isn’t easy to discern who would put the hand-up to good use.  It takes time to get to know people — and homeless people are no exception. The hand-up I’ve described did not take place in a single day.

But it did take place — and it did work. The role of a single benefactor cannot be discounted. But the main factor in my success was that I left all of my homeless stigma behind.

I am not alone. There are millions of people scattered about the streets of North American cities. People who once were your next door neighbors — who once looked very much like you. And now, due to the pandemic, a new upsurge in homelessness is on the rise. This consists largely of people who, just over a year ago, were working and faithfully keeping up on their rents and mortgages.

How logical is it to assume that all of them are “losers” and “lazy bums?”

How compassionate is it to turn a cold shoulder? To shrug and say: “There are services for people like you!”

How realistic is it to suppose that “services” will suffice to do what must be done?

How courageous is it to wash your hands of the matter, and refuse to associate with people who don’t look like me and you?

How open-minded is it to shun the homeless on the streets, and walk past them as though they were things — and not human beings?

The Answer Begins with You

I challenge anyone who has $600 to spare — and granted, that may not be many — to walk up and down the streets of Spokane and talk to homeless people, as you would talk to any other human being.

Talk about the ball game. Talk about the concert. Talk about your relationship hassles. Get to know these human beings who are no less human than you are. Find out their interests, their passions, their fields of expertise. Find out how much you have in common with these people who are just like you.

I’m not saying it will be easy. But the solution to the homeless problem in America does not lie in programs and institutions. It lies in removing the veil of stigma from the picture of the homeless individual.

Shelters and services may play a part, but they will never work effectively until this one thing has been secured.  Just as I said in my very first column, we need to strengthen our weakest link. We need to see  in every homeless person the book of humanity that we have judged by its cover. And our common humanity, one to another, must be revealed.

That book of humanity is a far more informative document than you might think. And that’s what my next column will be all about.

This is part four of a five-part series on homelessness. The next column will be published March 17.

Previous A Lesson in Cancel Culture from Dr. Seuss
Next Local Christian Leaders Call Christian Nationalism a “Heresy” and an Aberration of Historic Christianity