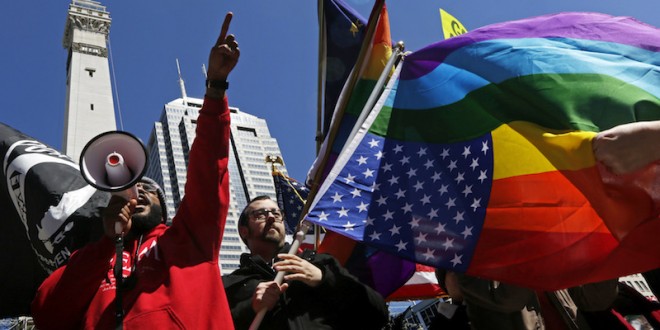 NEW YORK (Reuters) When Jason Nguyen saw that a crowdfunding campaign for a pizza restaurant in Indiana that refused to provide pizzas for same-sex weddings had raised more than $800,000 in less than a week, he decided to launch his own fundraiser to counter it.

Nguyen, a 32-year-old account manager from Virginia, was taken aback to find that his GoFundMe campaign to support LGBT rights across the United States raised only $700 in its first week – and racked up a slew of negative, hostile comments.

“(I thought) surely a message of love is stronger than a message of hate and so I set up this fundraiser to counter that one,” Nguyen, now living in London, England, but planning to move to California soon, told the Thomson Reuters Foundation by phone.

Indiana recently passed a controversial religious freedom act but revised it in the face of widespread criticism that it discriminated against the LGBT community.

Earlier this month, the owners of Memories Pizza in Walkerton, a small town in Indiana, came under fire after telling a television network that their Christian beliefs would prevent them from serving up pizzas at same-sex weddings.

The family-owned business faced intense criticism and bad reviews over the owners’ comments, and an online drive for donations to support the restaurant was launched on April 1.

Support poured in, the initial goal of $25,000 was rapidly left behind and the drive raised a staggering $842,000 before it was closed.

In a similar case earlier this month, supporters raised more than $100,000 to pay the legal fees of a Washington state florist who was sued for refusing to sell a gay couple flowers for their wedding because of her religious beliefs.

Nguyen said he was disappointed by the volume of negative comments directed at his first public effort to support LGBT rights, which he hopes will raise $1 million.

As of Thursday morning, most of the over 50 comments on the crowdfunding campaign’s page were critical of the initiative.

“Unfortunately for you, most of your Liberal followers are on the Government dole and won’t spend their own money to support you,” read one comment.

“I think it’s great that the non-tolerant LBGT community is doing so well with this campaign. I would donate but I gave it all to the pizza place that is being attacked by the bigoted LBGT community,” said another one.

Nguyen said the profits from his fundraising drive would go to the LGBT activist group Human Rights Campaign.

“(They are) very active politically and this is a very political issue,” he said. “(The) mentality is so deeply rooted that they don’t understand they are spreading hate, so we need to start with the law.”

View All Posts
Previous Why people of all faiths should go see Freetown
Next The Bible Says: Does God Approve of Slavery?