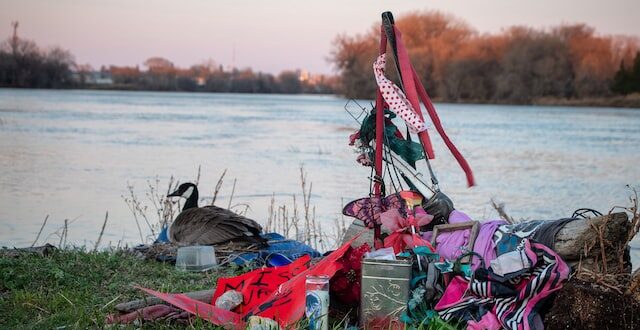 Makeshift memorial to Tina Fontaine - one of hundreds of Indigenous women and girls murdered or missing in Canada. 5 May 2020. Unsplash Photo by Matthew TenBruggencate

Recently, someone asked if I thought the pope wearing a headdress was cultural appropriation. No, I said, he was wearing a gift placed on his head by First Nations People.

What the person asking completely missed was the fact the pope was in Canada to apologize for the abuse and deaths of children at Indian Boarding Schools. While cultural appropriation is bad, cultural genocide is much worse.

Today, many people think since the old boarding schools are gone the issue is over. Nothing could be farther from the truth. The pain and suffering inflicted by the 18 different religious groups running the schools left a long-lasting legacy of trauma which is circling down multiple generations.

In Idaho, the De Smet School operated from 1878-1974, like other schools it is still operating under new a name and governance.

These schools, funded in part by the federal government, existed to make Native American children forget who they were; it was meant as a sort of a conversion therapy for assimilation. But these schools were not meant to make the students successful in the white world. Boys were taught basic trades such as carpentry and baking, girls were taught to be domestic servants.

The first explorations of three school grounds in the U.S and Canada have shown hundreds of hidden burials of children who either died from injuries, illness, extreme manual labor or killed outright. Their families were rarely informed. It has long been known children were beaten and sexually abused.

Journalist Mary Annette Pember (Red Cliff Band of the Wisconsin Ojibwe) has written extensively about boarding schools, detailing how many children – including her mother – were forced to attend the schools to be stripped of their culture. She has interviewed people from many tribes who said since they had no parent growing up, they did not know how to be a parent to their own children. Alcoholism, drug addiction and other issues have followed the boarding school survivors. This impacts generations beyond the individual.

Secretary of the Interior Deb Haaland should be commended for starting an investigation into the schools in the United States. As she said, the missing children still need to go home. In Canada, Pope Francis acknowledged the role of the Catholic Church and apologized. Other groups have yet to apologize.

Just as pressing today in Indian Country is the issue of Missing and Murdered Indigenous Women (MMIW). No one knows how many women and girls are missing because of the multiple jurisdictions involved — are the missing women under tribal, state, or federal laws?  Few seem to know. FBI statistics estimate 5,203 missing Indigenous women in 2021 alone. The state of Washington is one of the few to declare active work in finding the lost sisters.

Non-Native audiences generally do not understand how frustrating it is for a woman or girl to disappear, but there is no investigation, no media attention. It hits home hard when a non-Native woman or teen goes missing and there is a national manhunt complete with national news stories. The 2021 case of Gabby Petito comes to mind. Multiple law enforcement agencies and top-of-the news coverage while the MMIW cases were ignored.

Now, the image of a red hand over a mouth, an image created by Osage artist Dante Biss-Grayson, has started to catch people’s attention for MMIW. The red hand is a powerful image to draw attention to the thousands of women who have been silenced. It is hoped the startling image will move more people will pay attention to the issue.

What boarding schools and MMIW have in common is cultural genocide. Trying to eliminate the women and children from society strikes at the heart of a culture’s future. Ignoring these continues the invisibility and erasure of all Indigenous people.

His Holiness the Pope wearing a headdress placed on his head is not cultural appropriation, especially when it was a gift made at the time the pope apologized. What people need to concentrate on is bringing home both the bodies of the boarding school children and, hopefully, the missing women so tribal communities can heal.

Previous What Does a Non-Denominational Church Believe?
Next My Favorite Christian Author has Died