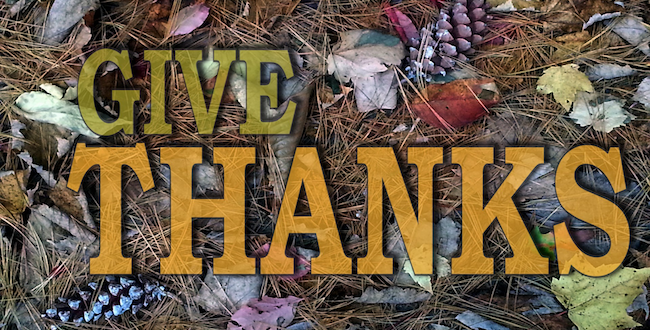 In the Name of Thanksgiving, Count Your Blessings

Thanksgiving and counting blessings are among the most powerful of spiritual disciplines. They also have been shown to make us more happy and joyous in our own lives. By counting our blessings, we get away from own egos and have to acknowledge the gifts we are given. We know the benefits and since the cost is free, why does it seem to come at such a premium? Why not practice counting our blessings more often and why do we have to be reminded to do it once a year? Many of us celebrate the day less to by being thankful and more to gore on Turkey dinner, get ready to elbow others for the latest gadget and to watch football.

Having the privilege of raising Tito and marrying Lace are beyond my wildest dreams, and certainly unmerited. I can claim no victory for myself in saying thank you to God for the gifts I have been given. I start my day with a few of profound practices, which I have been doing for a year. I say thanks for those gifts in my life, like friends and family. As time has evaporated, counting my blessings has made me aware of how much my life is a gift and not a self-generated adventure. I am indebted to my relationships and God for everything. Another practice has been to pray for friends and enemies alike, asking for the Spirit of Love, the Spirit of Friendship, and the Spirit of the Holy Spirit to be with them. For in a dark world where the forces of fear are being used to manipulate and make Mammon and greed the religion of the land, we need to hold the grace of God and way of the cross.

Today we celebrate Thanksgiving. Thanksgiving became a national holiday during another dark period in American History. In a war ravaged epoch when the nation bled to its sin of slavery and corresponding anti-christ philosophy of racism, President Abraham Lincoln declared the holiday. Let us remember his words and enter with God to be a shining light of love on the hill.

“The year that is drawing towards its close, has been filled with the blessings of fruitful fields and healthful skies. To these bounties, which are so constantly enjoyed that we are prone to forget the source from which they come, others have been added, which are of so extraordinary a nature, that they cannot fail to penetrate and soften even the heart which is habitually insensible to the ever watchful providence of Almighty God. In the midst of a civil war of unequalled magnitude and severity, which has sometimes seemed to foreign States to invite and to provoke their aggression, peace has been preserved with all nations, order has been maintained, the laws have been respected and obeyed, and harmony has prevailed everywhere except in the theatre of military conflict; while that theatre has been greatly contracted by the advancing armies and navies of the Union. Needful diversions of wealth and of strength from the fields of peaceful industry to the national defence, have not arrested the plough, the shuttle or the ship; the axe has enlarged the borders of our settlements, and the mines, as well of iron and coal as of the precious metals, have yielded even more abundantly than heretofore. Population has steadily increased, notwithstanding the waste that has been made in the camp, the siege and the battle-field; and the country, rejoicing in the consciousness of augmented strength and vigor, is permitted to expect continuance of years with large increase of freedom. No human counsel hath devised nor hath any mortal hand worked out these great things,” Abraham Lincoln