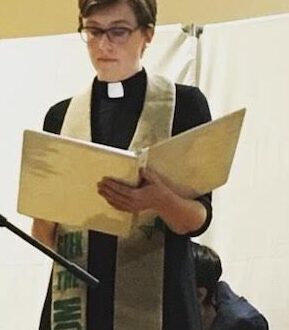 Rev. Katy Shedlock is a Methodist minister in Spokane/Contributed

In the Days Before the Presidential Election, Some Spokane Ministers Encourage Crossing the Line Between Faith and Politics

In the Days Before the Presidential Election, Some Spokane Ministers Encourage Crossing the Line Between Faith and Politics

To Rev. Katy Shedlock, American politics in the weeks leading up to the 2020 presidential election “just seems like a screaming match.” With an environment like that, she said, it’s no wonder many faith leaders are reluctant to tiptoe into the political realm.

“The only political conversation that seems to be happening in the public sphere is one of, ‘This side is different from that side, and we can never get along and see eye to eye,’” she said. “That’s a scary thing to engage.”

But in her ministry, Shedlock has discovered the power of bringing politics and faith together.

Shedlock is pastor at Highland Park Methodist Church as well as Creator’s Table, a less-traditional congregation that meets in Spokane’s West Central neighborhood. As Shedlock and others were starting Creator’s Table, they worked with Spokane Alliance to learn the basics of community organizing.

It was a clarifying moment for Shedlock. She began to understand church in a new way — as a place for people who may not agree on everything to find points of connection and common ground that can lead them to make a difference in their communities.

“I want church to be the last place in our society where people who think differently in these things can still come around this table,” Shedlock said.

Most Americans don’t think faith and politics should mix, according to a 2019 Pew Research Center Survey. The survey found that 63 percent of U.S. adults say houses of worship should keep out of political matters.

When faith and politics have entered the national conversation in recent months, it’s often because of controversial moments in the presidential election — in June when President Trump posed with a Bible after law enforcement dispersed peaceful protestors with gas, or in September when a Catholic cardinal said he believed the church should deny communion to former Vice President Joe Biden due to Biden’s views on abortion.

But Shedlock and other Spokane ministers said they believe faith and politics can intertwine in ways that lead to good results for individuals, communities, churches and the nation.

As an attorney, law professor and Jesuit priest, Rev. Bryan Pham is familiar with the legal limits the government places on houses of worship when it comes to engaging in politics. But he doesn’t believe people of faith can separate the two in their daily lives.

Pham, who teaches at Gonzaga University and is the law school’s chaplain, found himself thinking about this matter during the Congressional confirmation hearings for Supreme Court nominee Amy Coney Barrett, who is Catholic.

While Pham said he doesn’t have a preference for or against Barrett, he found himself bothered by members of Congress who asked questions implying that Barrett’s faith should not influence her as a judge.

Pham said the Constitution’s separation of church and state makes it clear the United States cannot have an official religion or favor one faith over another.

“It doesn’t mean you divorce who you are when you come into the courtroom, you come into the legislative branch,” he said. “As people of faith, it’s unfair and unreasonable for people to ask us to divide and separate our faith from our public life.”

This doesn’t mean illegally crossing the line into churches endorsing candidates or parties, Pham said. IRS code prohibits houses of worship and other nonprofits from participating in political campaigns. But Pham said it does mean encouraging people to reflect on who they are before God and how that should affect their political decisions.

For example, Pham pointed to the Trump administration’s past policy of separating migrant children from their families when they crossed the U.S.-Mexico border. Pham used to teach immigration law at Loyola Marymount University in Los Angeles and work with immigrants on both sides of the border. He spoke against the separation policy — as has Pope Francis.

“We can name and we should point out and identify injustices in our society, and we can do that without telling people who they should and should not vote for,” Pham said.

Rev. Lonnie Mitchell, who retired in August as pastor of Bethel African Methodist Episcopal Church, said his main goal as a pastor was to help people solve their spiritual challenges and to put Christ above anything.

But he also acknowledged there’s an element to politics in all things, and said people of faith need to “speak truth to power.” Bethel is a community-minded church, he said, and solving problems in the community may pertain to politics.

“I think the trick of it is trying to separate things for the good,” he said. “So that’s what I direct my attention toward.”

Mitchell has been involved in Spokane city politics for decades. In the 1990s, he partnered with the city council to draft the ordinance creating the Citizen Review Commission overseeing Spokane Police Department conduct. More recently, he’s been involved in the discussion of where to locate the new Spokane Community Court branch in the East Central neighborhood.

“I’m the type of person who always tries to unite other people, to bring other people together, than to try to divide,” he said. “I think it is very important that government and faith come together to solve problems in our community.”

Shedlock and the people of Creator’s Table have also focused their political activism on the local level. Earlier this month, Shedlock and other church members participated in a Zoom call with Spokane City Council members to advocate for a small local option tax for affordable housing.

“That’s a space where the church is politically active in a nonpartisan way that really makes a difference in the community,” Shedlock said. “The institution of the church is the connecting point for that action.”

Pastor Mark Finney said Emmaus’ congregation is small, but still includes people from a range of races and ethnicities. When church members shared how racism touched their lives, the church decided to “lean in” to the discussion.

Emmaus members studied “Rediscipling the White Church: From Cheap Diversity to True Solidarity” by David Swanson over the summer. In August, Finney invited Black and Native pastors and activists to speak to the church. Moving into the fall, Finney decided to focus on polarization, using the stories of biblical people like Esther and Daniel to demonstrate how the people of God can choose to interact with ruling powers.

American politics in 2020 tries to “set the boundaries with how we relate to each other,” Finney said, but Christians should avoid taking partisan sides.

“Does the Scripture give us a third way of approaching things that’s neither red nor blue, neither liberal nor conservative, but might recognize the truth that’s in both of those camps and might lead us to a higher calling and deeper solidarity?” Finney asked.

When Pham teaches undergraduates at Gonzaga, he encourages them to stop thinking in terms of Republican and Democrat.

“You’re a person with experiences, with hopes and and aspirations and fears and anxieties,” he tells his students. “The complexities of who we are as people cannot be divided truly neatly between two parties.”

Finney said some people have left Emmaus and implied it was because of recent conversations’ political nature. But others have stuck around through the discomfort.

“It’s really meaningful for me to be in conversation with people and to disagree and to love each other and to stick with the conversation,” he said. “I wouldn’t say that we’ve arrived somehow, but I do think that in the gospel we’ve got something that runs deeper than our partisan allegiances.”

Mitchell emphasized friendship as a key way to avoid partisan divides, within churches and outside of them.

“In our faith community, what we believe, and what I tell everybody, is relationship is a job,” he said. “I would always challenge people to work at the relationships and not just let it go south, where you have the ability to keep at it and hope that things will come through as friendships.”

Finding unity across differences is a gift from God, Shedlock said.

This even means attempting to build bridges with people whose views differ wildly. Shedlock referenced Lutheran pastor and writer Nadia Bolz-Weber, who in her book “Pastrix” quotes a friend who told her, “Every time we draw a line between us and others, Jesus is always on the other side of it.”

“But as long as someone wants to be part of the congregation and is willing to participate in good faith in the community, then I’m willing to receive them as they are,” she said. “I think that’s how God receives us.”

Preparing for the election and beyond

In the final days before the 2020 election, Mitchell said, he hopes Americans of faith will resist the internal divisions and outside forces that threaten the country’s democracy. Instead of “silent complicity,” Christians can fight back through their vote.

“I’m hoping that people would take the opportunity to vote, and make sure that that vote is your voice,” he said. “I would encourage people to exercise that right so that we will not lose our democracy.”

Shedlock and the people of Creator’s Table are preparing for the emotions that inevitably come with a presidential election, no matter how it turns out. The church will host storyteller Rebecca Anderson to lead a virtual workshop Nov. 4, leading up to a showcase Nov. 7.

Finney has been urging his congregation to think long-term, remembering that “history is written in generations, not in election cycles.”

“Biden and Trump will both be long gone by the time our kids are leading churches,” he said.

Likewise, Pham urged people to remember that no president can fill their spiritual needs, or change a faith leader’s role to deliver hope and good news.

“There are people hurting on both sides, on all sides, so how do I become attentive to them?” he said. “Really, at the end of the day, my work doesn’t change. My mission is still the same.”

Previous Letter to the Editor: Calling for Election Integrity
Next Will 82% of Evangelicals Really Vote for Trump? I Hope Not, Here’s Why