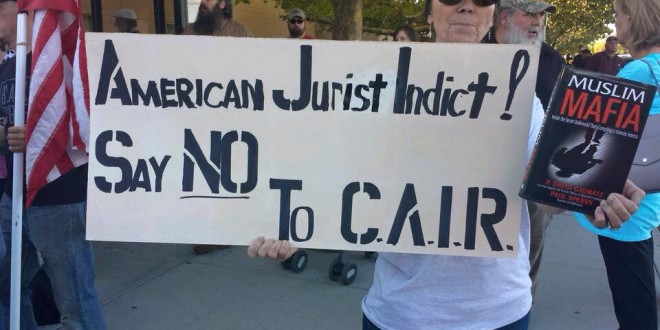 A woman in Spokane protests against CAIR/Facebook photo

In Spokane, “The ugly face of Islamophobia” reared its head

“Sharia law is not compatible value the U.S. Constitution… We are here today to stand against the jihadis.” I overheard these words from the mouth of Rep. Matt Shea as I stood in disbelief at the display of hatred and vitriol from the crowd of anti-Muslim protestors rallying outside of the Northeast Community Center. Muslim community members and families stood in the back, their faces showing noticeable dismay and fear as pseudo-militia group members patrolled the rally with guns in tow, filming and deliberately intimidating Muslims and those of who oppose what they stand for. All of this happened due to a simple council salutation honoring the Council on American-Islamic Relations (CAIR) for the vital work they do in the community.

When members of CAIR and the local Muslim community accepted the salutation, Usamah El-Bakkush stepped up to the podium and spoke of his desire to become a doctor and his life in this community. He began to cry when he talked about where he went to school, and how long he lived here. I had to hold back tears myself. This man has lived in this community his entire life. He was born here. He went to the same schools many of us did. His dreams and aspirations are quintessential affirmations of the American Dream. Yet, he had to hear and see a crowd of people who believe he does not belong.

The ugly face of Islamophobia had reared its head in full force with the rally outside, and confronting that ugliness and hate is critical to the health and well being of our community. Islamophobia has been on the rise since the events of 9/11. As pundits and commentators searched for answers to explain the horror and tragedy of the attack, a group of Evangelical Christians and prominent atheists latched on to one explanation: Islam itself. They feed in to the narrative propagated by al-Qaida that there is a clash of civilizations at work. They cherry pick suras and ahadith, stripping them of all context, to confirm their own biases; and ignore the views and words of Muslims all over the world who reject the extremism and terrorism perpetrated by groups like al-Qaida and ISIS.

A toxic mixture of fear, ignorance and lack of exposure continue to feed Islamophobia’ ascent into the mainstream. Hate crimes against Muslims have remained disturbingly frequent. Books, articles and letters espousing uninformed opinions on Muslims and Islam permeate the Internet. And few of those who who spout such opinions make an effort at interfaith dialogue. In a society as segregated as ours, it’s not a surprise to learn how few people have actually taken the initiative to interact and dialogue with Muslims in their communities. Yet, this interaction is precisely what is necessary to overcome Islamophobia’ grasp.

I know this because many years ago as I stewed in my own fear and ignorance, I subscribed to the same beliefs as noted anti-Muslim author Robert Spencer. It was not until I took the time to truly educate myself, reject the fear I allowed to take hold of me and engage in open, honest and heartfelt conversations with Muslim-Americans across the country, that I realized how utterly wrong I was. I have since had the pleasure of befriending many Muslims, both here in America and abroad. They have enriched my life, and affirm what I now believe about the vast majority of people on this planet: that we all desire life, liberty and the pursuit of happiness. Our life, and our pursuit of happiness, may not be identical; but it is precisely that kind diversity that makes a vibrant, strong community. As a society, we cannot afford to continue living our lives in homogeneous silos. We owe it to everyone, including ourselves, to embrace and live the values we espouse.

Previous An apology is where it has to begin
Next Who is Pope Francis? Insights on the remarkable life of a historic pontiff