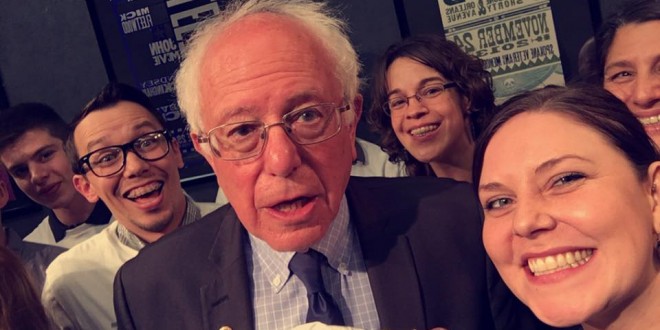 As he passed through Spokane for the second time in a week, Sen. Bernie Sanders met privately with members of the Spokane Interfaith Council and a handful of local faith leaders.

In a 20-minute meeting before giving a public speech at the Spokane Veterans Memorial Arena, Sanders addressed the ethics of income inequality, political revolution, anti-Islam rhetoric and the need for grassroots organizations — like the Interfaith Council.

“Anybody who reaches out and wants to have a conversation about building community and interfaith work, we’ll definitely take them up on it,” said Interfaith Council President Skyler Oberst. “Other candidates have come through and have not reached out to us to engage.”

Sanders said many of the policy issues currently being discussed, such as climate change, are “moral principles.”

“The truth is these are issues of justice, decency and equality,” he said.

When asked by local Muslim and Interfaith Council member Ayesha Malik about recent statements made by GOP candidates to crack down on all Muslims, Sanders said what Donald Trump, specifically, is saying is problematic.

“What Trump and others have been saying, the idea that somehow we’re at war with a religion, rather than a terrorist organization is outrageous and certainly not what this country is about,” Sanders said.

Malik said his words were satisfying, but weren’t surprising.

“I already knew that was going to be his response because I’ve been watching videos of him online, so I just wanted to hear him address it to me personally so I can hold it to him,” she said. “God willing he’ll be accepted into office and I’m hoping when he’s in office he will work on some interfaith initiatives.”

Sanders closed his meeting with faith leaders by promising to work toward unity.