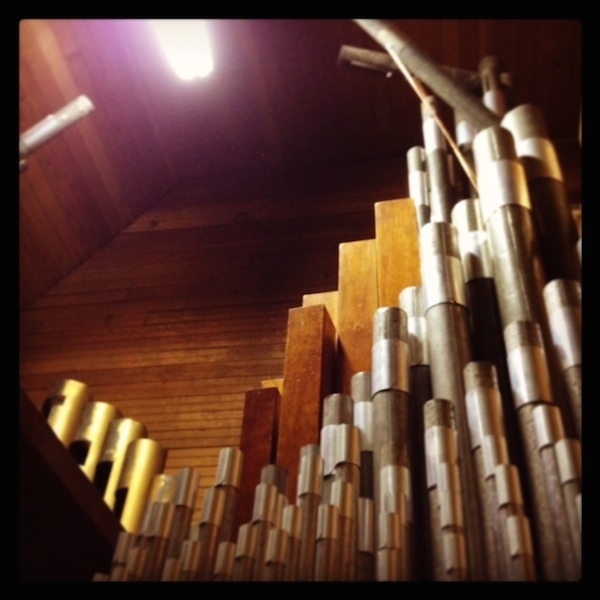 In Spokane Region Organists, Organs and Liturgical Music Are Rare and Priceless

In Spokane Region Organists, Organs and Liturgical Music Are Rare and Priceless

From Kansas City to Baltimore and across smaller cities throughout the United States, pastors and church councils have found it difficult to hire organists.

As organists retire, there are simply fewer organists to replace them. The overwhelming reason is a lack of interest among younger musicians, although the cost of organ maintenance and full-time musician salaries also play a role in the declining numbers of church organists.

The Rev. Edwin Weber of St. Mark’s Lutheran Church on Spokane’s South Hill majored in sacred music with an organ emphasis. He described the instrument as “something of a challenge” to play. He quickly added that some musicians “like the challenge.”

An organist uses a foot keyboard, along with numerous hand keyboards and stops. The keys release controlled bursts of air which are then funneled into carefully calibrated pipes that shape the air into the familiar notes, octaves and chords that congregations hear on Sundays and that everyone hears in classic haunted houses.

Weber explained that the pipe organ’s bone chilling tones were developed in 9th century Europe and the instruments were originally an academic novelty. They were built in Europe’s first universities where they served as visual aids in the teaching of music and mathematics. Even today, church organ pipes are arranged in columns that evoke harmonic progression.

Organs are wind instruments and so is the human voice. By the 16th century, the instrument gained major liturgical significance as Lutheran churches adopted the practice of congregational singing. Pipe organs in major European cities led congregations in powerful renditions of “A Mighty Fortress is Our God,” “We All Believe in One True God” and other 16th century hits, which were followed by Pachelbel’s canons, Bach’s fugues, Handel’s concertos and other works.

In today’s era of praise bands, jazz services, pianos and guitars, younger worshipers are not always familiar with organ music or even the instrument itself. Chad Winterfeldt, a professor of music at Gustavus Adolphus College in Minnesota, explained that young musicians are drawn to popular forms of musical expression like guitars and pianos.

Winterfeldt still has students who want to play the organ. But those students face challenges that go beyond the full-body workout that organists regularly perform. Many churches rely on long-serving volunteer organists while others are simply not able to afford a full-time organist.

Organists are typically employed on a part-time basis and float from one church to another. The average national hourly rate for a church organist is $30 per hour, but rates can be closer to minimum wage in some instances. A young musician with a specialized, high-demand skill  might still find it difficult to support themselves as a church organist.

Along with the cost of an organist, organs are expensive to purchase and maintain. In the Spokane area, many organs are well over 30 years old, with the oldest organs dating back to 1905. Spokane’s most famous pipe organ sits in the Cathedral of St. John the Evangelist where it was installed in 1961. In 2000 it underwent a major console renovation. Renovations of this magnitude can cost hundreds of thousands of dollars, which is still less costly than purchasing a new pipe organ.

Choosing between renovations, repairs, selling an organ or replacing one can be difficult.  Weber said it comes down to stylistic choices. He explained that every church weighs its ministerial needs and chooses the instrument that best suits that need.

“Not all churches require an organ,” he said.

There are a wide range of worship options. He encouraged, “creativity, and a willingness to think outside the box.”

However, not all worshipers view liturgical music as a mere stylistic choice. Traditionalists might lack the willingness to try something new for  deeply personal and spiritual reasons.

Fortunately for Snyder, he lived in Spokane where the organist shortage has seemingly yet to arrive. Spokane organists Carolyn Payne, Taylor Giese, Floyd Czoski and Mark Haberman played the works of Pachelbel, Gerike and Dahl in Snyder’s honor. The memorial served to exemplify the significant role the pipe organ continues to hold in liturgical music.

Weber asserted that regardless of worship music options and integrations, organs and organists are not going anywhere. He maintained  that the music, services and traditions will continue, saying, “There may be fewer players, but that is why they are so precious.”

Previous Sacred Texts: I Have No Sacred Texts
Next Tangled Politics and Twisted Journalism