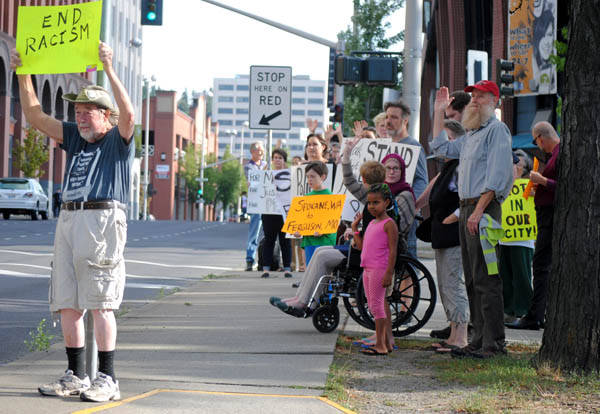 In Spokane, protestors show they stand with Ferguson

About 20 people waved signs that read, “End Police Brutality,” “Stand with Ferguson,” “Remember Otto Zhem” and other phrases as a way to show that many Spokanites stand in unity with those protesting in Ferguson.

Sarah Peterson had been waiting for others to organize a Stand with Ferguson rally, but when no one did, decided to coordinate one herself. She said she wanted something to attend so she could show her rage and heartbreak about the shooting of Michael Brown.

On Aug. 14 Brown, who was unarmed, was shot six times by a white police officer in Ferguson, Mo, according to police reports. He was 18. The shooting has spurred protests in Missouri, and in other parts of the country.

“For me, I needed to do something to show that I stand in solidarity with the protestors in Ferguson, that I stand with them, not with the police,” Peterson said.

She added it was important for the Spokane community to witness Friday’s rally so they know there are people in Spokane who care about and want to see an end to the racial tensions which exist throughout the country.

Peterson, who was trained as a Quaker minister, said the faith community needs to have more dialogue surrounding race. Those conversations, she said, will hopefully grow and lead to policy changes.

Lisa Logan also attended the rally, bringing her three children with her.

She said her family has been staying updated on what’s happening with Ferguson, and she wanted to her kids to know that they can take a stand even from far away.

And, she added, “Things like this happen everywhere. It happens in Spokane. We have to be responsible and speak about that.”

In Ferguson, protests continue, but have been peaceful the past two nights, according to the LA Times.

Additional photos of the Spokane rally can be viewed on the SpokaneFAVS Facebook Page.

Previous SpokaneFAVS to go offline for maintenance
Next The Bible as Gospel, part 2